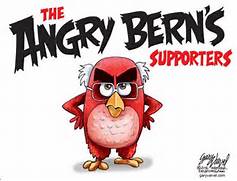 Newly elected Humboldt County Democratic Central Committee (HCDCC) member Michele Walford from the 1st District chaired a recent Communication and Education Committee (CEC) meeting on Tuesday November 29th at HCDCC Headquarters. It was more of reorganization or restructuring of a committee that is tasked with electronic media, member support and training, technology support, and community communication, such as website and facebook maintenance but tonight the focus was energizing new members and new volunteers. Over 20 people came to participate.

The CEC opened with a pledge of Allegiance to the flag. (There, we are not all communist, socialistic liberal left wing anti Americans!)

The first thing we discussed is “Who or what are we locally and State wise as Democrats?” There was some back and forth about how the Democratic National Committee screwed up the Primary election for Bernie Sanders but all agreed we need to heal and solve this issue in the future. So as local Democrats, “What are we?”

So after identifying who we are, what can we do to help the local Democratic Party?

What can we do right now in the immediate?

What message do we want our leaders to have?

What can CEC do better?

Next topic of issue for the 2017 CEC will be a resolution to “Abolish the Electoral College.”

Is Recession on the way since Trump is in office?

USA Today has a great story and graph about how recessions come and go, but largely when Republicans are in the white house. Click the USA link to see the full graph back to 1901. 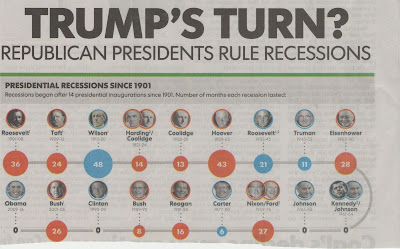 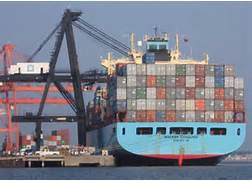 Since I was elected commissioner for the 4th Division of the Humboldt Bay Harbor, Recreation and Conservation District (HBHR&CD) in 2009 the narrative from some people critical of the commission has been a conceived notion we have given up on shipping and only focus on Aquaculture. This is not the case. We have had setbacks that we were not able to control such as shoaling caused by  sediment from the Eel river that received large volumes of rain this last year. This caused a few ships to be turned away, but overall we are surviving.

In 2016 we are expected to reach cargo levels of 583,019 metric tons. That is a 70% increase from 2015! Not only that, projections for 2017 shows we will nearly reach the million ton threshold next year which would be an additional 68.1% increase and a level not achieved in Humboldt Bay since 1991! A quarter of a century ago! That was when we had 2 pulp mills and one sawmill on the peninsula with nearly 1,000 high wage union workers. How did this happen? California Redwood has made vast improvements and upgrades to their facility with hopes of 10-12 vessels in 2017 and Schneider dock has picked up more log customers and Sierra Pacific dock reports stabilized business.

I know many people feel the Timber Industry is dead, but Lumber/Logs and Wood Chips represent about 50% of our shipping tons. When the pulp mills were open they added another 350,000 tons a year. From 2000 to 2008 the Samoa Pulp mill represented about 25% of the total volume of tonnage. That was a huge loss.

The HBHR&CD commissioners continue to be proactive in soliciting businesses that would be a good fit to the bay and we have done our best to lobby and make sure dredging by the Army Corp is done each year. We are thankful to have partnerships with California Redwood, Schneider dock, and Sierra Pacific to make sure this happens.
Posted by samoasoftball at 11/17/2016 11 comments: 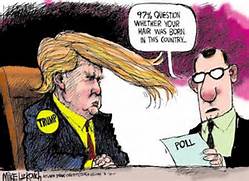 I was doing voting inventory on my Mother and Father's children and came up with some eye opening observations or speculation. My siblings voted 4-4 for Trump and Hillary. Their spouses voted 5-2 for Trump. My sons, nieces and nephews voted 9-7 for Hillary. So overall my immediate family voted 16-15 for Donald Trump.  And of those, the ones with the most money voted for Trump and the ones with the least voted for Hillary. How did your family vote overall?
Posted by samoasoftball at 11/11/2016 4 comments: 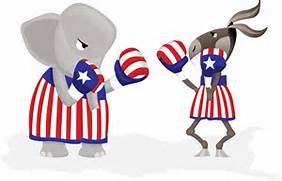 Might as well concentrate on the positives. The Humboldt County Democratic Central Committee (HCDCC) endorsed candidates and measures won Humboldt County elections by significant margins even though they were out spent by over $100,000 in aggregate by the opponents. The HCDCC "boots on the ground" electioneering was very successful this election. Even Hillary won huge in our generally Liberal county.

Congrats to Austin Allison as newly elected Councilman  for the City of Eureka, and to re-elected Arcata city Council-members Mike Winkler and Susan Ornelas. Also congrats to Measure "P" and Measure "V".
Posted by samoasoftball at 11/10/2016 1 comment: