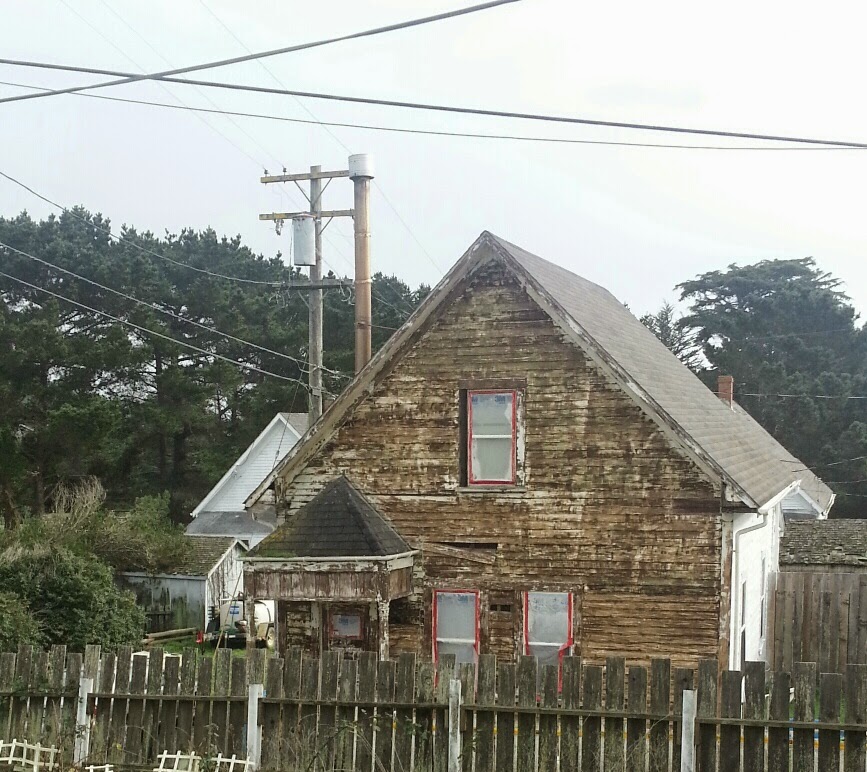 (This is the house I see from my back porch everyday. Lead paint abatement project put on hold I am guessing.) In 2001 Robin and I were so happy to see the town of Samoa sold to the Samoa Pacific Group (Dan Johnson and Lane DeVeres) and their role out of plans for the future were bright. They said they planned to make lot line adjustments and parcel out each house to enable the long time Samoa residents to purchase. We were promised the first chance to buy these homes after there were cosmetic repairs to the outsides such as roofing and painting. There would be parks and trails, grocery store, shopping center and a mix of new houses and affordable housing. (AKA apartments.) Peninsula Elementary School would have an influx of new students and there would be a positive energy for us sandwellers.

Since 2001 there has been many iterations of the original master plans. Dan Johnson has learned one thing. Government can be so slow. While serving as a Director of the Samoa Peninsula Fire Department we had the Samoa Pacific Group come many times to try to form a Peninsula Community Service District so the town of Samoa could provide new infrastructure such as Sewage, Water and Parks. Each time they were met with push back from either the board itself or the residents of Fairhaven.

Now we learn from todays Times Standard that the project is jumping original phases to the project and building the apartments first. They have a 3.8 million dollar grant that needs to be used by 2015. The first most needed piece of the development is a waste-water treatment facility. So the grocery store, fire station, park, trails, campsites and other visitor services will not be in place beforehand as originally proposed. The Board of Supervisors and the California Coastal Commission will have to approve the amendments to the original plan. While I am disappointed in the process looking 14 years back, I am supportive of the project moving forward for the heath and vitality that I hope can be restored for the town of Samoa. That is one long time sandwellers opinion. And I have seen much in the nearly 35 years I have been a resident.

Measure "S" puts Marks Consulting in the win column again! Bergel? I was told last week of this result. 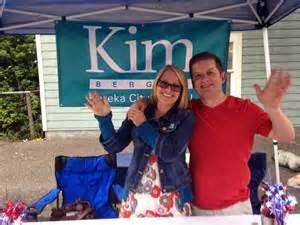 Eureka School Bond Measure "S" wins! I was part of a large committee that had over 100 volunteers in one capacity or another. Orchestrating this mass of people was Gregg Gardiner and my hats off to him for his tenacity and hard work. I did data base management and it was huge. Around a 1/3 of all voters in Humboldt County live in the Eureka City Schools jurisdiction. Lots of walking sheets and phone banking sheets and then the entry of the supporters and banking them for the Get Out The Vote (GOTV). It wasn't flawless, but this was probably the most aggressive GOTV I have been involved in. The first election report showed us well short of the 55% threshold needed for the bond to pass and panic set in at the victory celebration for volunteers. People were asking me what would it take for victory to be stolen from defeat. I told the room to hope for a 60% poll voting showing to put us back in the game. Thankfully that happened but the volunteers were left at the edge of their seats for 17 days. The GOTV won this election. Went from around 80 votes up to over 300 up after absentee votes at the precincts were counted. Campaigns are controlled chaos. This campaign was successful keeping the chaos controlled.

I had lunch a few days back with a Humboldt political insider. (No, not MIM.) They had voter information of past elections and asked me to evaluate the trends. It concerned the Mike Newman vs Kim Bergel race.  I am a certified para-statistician (Thank you Louisiana Pacific for sending me to this certification process for operators.) and am obsessed with operational and political trends. All of information gathering was sitting in front of me and I offered that Newman was in trouble. The insider said if the Absentee Votes reached around 1,600 that it might be game over. That person was absolutely correct. And they did not want to be. I have told enough people this last week about what was going to probably happen. Not many believed.  I know, Lies, damn lies and statistics.
Posted by samoasoftball at 11/21/2014 1 comment:

"Dignity Dump" or "Dump with dignity at the Dunes?" 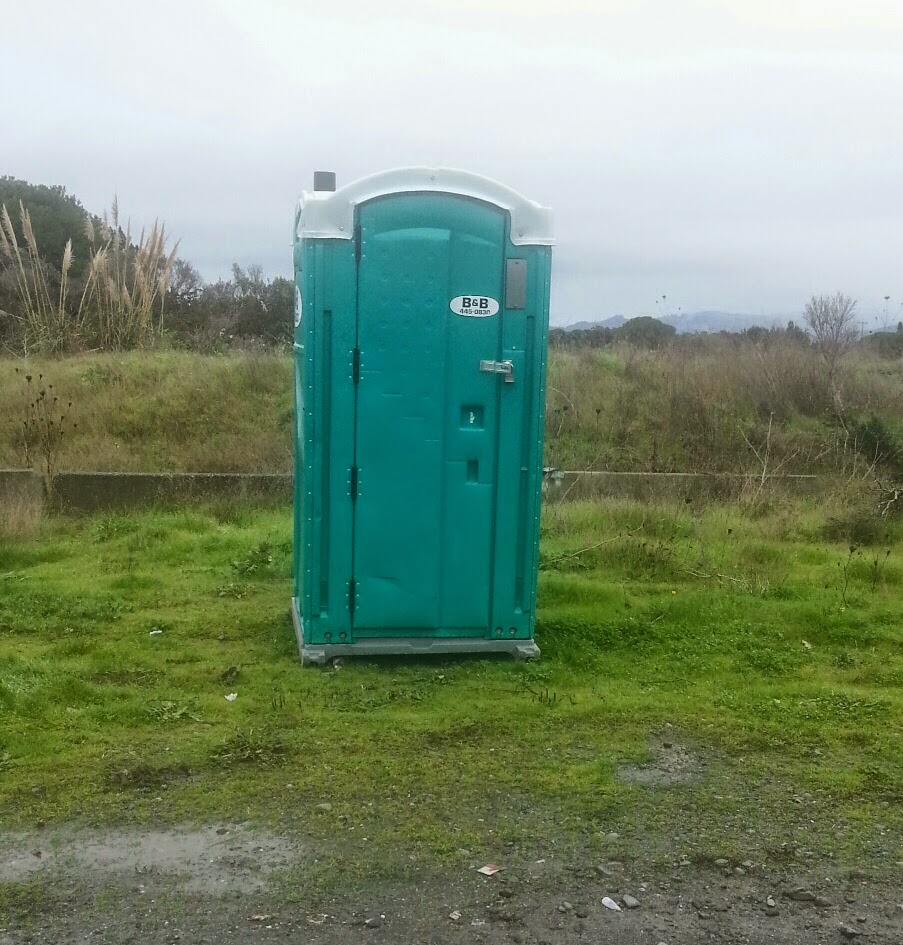 For years I have brought up the fact the there are many homeless that make the trek to the Peninsula to use the dunes as their home. There are no bathroom services for them and you know they have to go somewhere. I have brought this up to Social Services and other agencies through meetings concerning homeless not having a place to go with dignity. I thought it would be a good low cost solution to have even just B & B's at the end of the 255 bridge at the "T" at the end. Seems that was problematic at levels that seem excuses. Well I was pleasantly surprised to find out the Humboldt Bay Harbor decided to surprise me with supplying one on Harbor property near the Cookhouse. For $80 a month we can feel good about doing something positive for the dunes. As long as people treat this with respect and do not vandalize this is a positive move. Now help me with a proper name.
Posted by samoasoftball at 11/17/2014 3 comments: 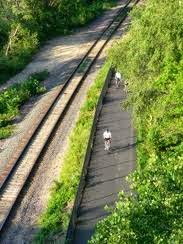 Ukiah City Civil Engineer Ben Kageyama gave an update on the 3/4 mile rail with trail project to the North Coast Rail Authority board yesterday. The construction will be complete by January!  KHUM also did a recent update. So there is hope and an actually completed testament to look at.
Posted by samoasoftball at 11/13/2014 No comments:

NASCAR "Good ol Boy" Domestic Violence is all good. It's in their book!

Seems to be a a two sided racist issue when it comes to domestic violence. There is a great  No more program being brought forward using many African American athletes to educate America on domestic violence issues. But NASCAR has totally ignored the issue allowing Kurt Busch to participate today in a NASCAR event in Phoenix where he finished and placed 7th. So Ray Rice is given an indefinite suspension and Kurt is not even considered. Is it a race issue? I believe so. Last week there was an NASCAR brawl that had very little coverage. If this incident happened in the NBA there would be epic media since blood was drawn on two popular athletes. Just saying. For anyone out there needing help with domestic violence, here is the website:  http://hdvs.org/. 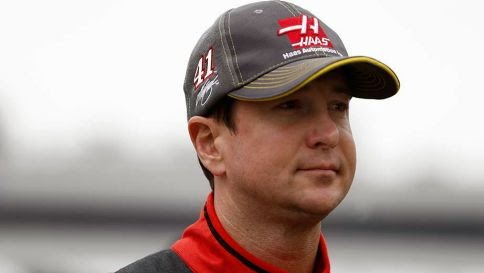 Draft land use Ordinance for lawful cannabis cultivation roll out tomorrow at 5:30!

California Cannabis Voice-Humboldt is going to have a public forum and panel discussion rollout of our draft land use ordinance encouraging lawful guidelines to cultivate cannabis. The event will be hosted by the Blue Lake Rancheria tomorrow at 5:30pm, Thursday, 11/6/14 at the Sapphire Palace. This will hopefully prepare Humboldt County to be on the forefront of the potential statewide initiative legalizing Cannabis in 2016.
Posted by samoasoftball at 11/05/2014 1 comment:

Voters are dumb! My predictions locally. 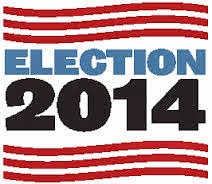 A recent survey in California showed that only 42% of the voters know that Jerry Brown is running for another term. Not only that, but only 1 out of 5 could name his Republican opponent Neel Kashkari! Wow. What is the problem? Apathy? Got me, but below is my fearless predictions for some of the local election results. (No science for the most part, although I have been working on Measure "S". And this is not an endorsement for any item. Observations from the peanut gallery only.)

Eureka City Council: Natalie Arroyo over Chet Albin and Mike Newman over Kim Bergel. Natalie has had a strong phonebanking campaign and dominated the debates. Mike Newman has been very active attending community events over the last 4 years and has worked very hard in his first term. I don't always agree with him, but he is always respectful.

Measure P: I think this will pass. Lots of good arguments both ways.

Measure Q: I am kinda shocked, but I think this will pass. If I lived in Eureka, I would vote against. There had been some questionable spending the last few years. But the Measure Q team has done a good job with this campaign.

Measure R: I predict it will pass, but not in the overwhelming fashion I thought it would. The "No" on R has come on strong, but way too late.

Measure S: The phone banking results seem to show it will pass with over 60%. But that 5% fudge factor could go the wrong way. But the GOTV strategy for the Measure "S" team tomorrow should carry the measure over the top.

Measure Z: From all the people I have talked to this measure should fail miserably. No clear and concise message and just a way late start to the campaign. If I am wrong here I will probably have to quit my election predictions.

A memorial for Mark Sprague will be at Redwood Park in Arcata tomorrow at 1pm. Went too early.