Off Shore Wind Energy looks to be on schedule! 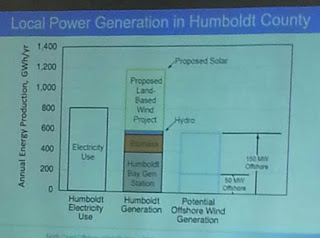 Why the interest for wind energy off of Humboldt Bay?

·       The North Coast has World Class off shore wind resource

·        Technology is now available and affordable

There is a partnership between the RCEA and Principal Power to assemble 10-15 wind turbines and place them on floating platforms 25 miles off shore in water 600 to 1,000 feet deep and anchors to the sea bed and create 120 to 150 Mega Watts of power.  The Bureau of Ocean Energy Management (BOEM) put out Request for Qualifications (RFQ) in 2018 and already possesses site control. The Power Purchase Agreement would happen in 2022 and the build out in 2025.

In 2020 the bidding process will happen. This entails an auction up for the highest bid. I identified myself as an employee of CIFAC and asked how this process would actually work. It seems this is a federal process that the BOEM would control and they want the maximum monies they can garner.

The Humboldt Fisherman’s Marketing Association Vice President said the fishermen are willing to be part of the solution process although they said they were the most regulated fisherman on the west coast. They wanted to focus on community benefits and having a say in the fishing territories but staying proactive.

I did ask where they were with the PLA process and they publicly said they were in negotiations.