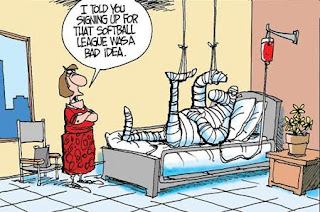 The Mad River Softball Association is hosting a Sunday Spring Softball League in Arcata starting May 1st and running through June 19th. Teams will play a double header each Sunday for a total of 14 games and then the top 6 teams will go into a playoff on Saturday June 25th. Cost will be $575 determined by amount of participants. Teams must commit by April 25th. Players without a team can call and be put in pool for free agent teams. Players must be 16 years of age or older. For more information contact Richard Marks at 445-3432 or email Samoafog@aol.com.
Posted by samoasoftball at 3/30/2011 4 comments:

Gas 54 cents less 100 miles south! Who is Gouging who! Investigative Reporters to action!

I have been vacationing and traveling by auto from Eureka to Phoenix this last week and on my way back I gassed up in Willits. I paid $3.63.9 per gallon. When I entered Eureka, I saw the first station coming into town sold gas for $4.17.9 per gallon, and per our gas price history, the prices varied only 2 cents all the way through town. Every town all over the west coast I have traveled, the prices vary at least 15cents. Why not Eureka?

Oh yes, I have seen the local media reports that let us know we have the highest prices in the contiguous states and yet I see no explanation why.
I am challenging all local Northern Humboldt press! Times Standard, North Coast Journal, Arcata Eye, McKinleyville Press and how about you two, John Matthews and Hank Simms of Lost Coast Communications!

Who is screwing the general public when it comes to the gas gouging we are subjected to in Humboldt County for years?

Let me give a few observations or questions that others can add or explain:

Is this problem to be dropped on the gas station/convenience stores? Is the price they charge based on gas profit margin or food products margin?

Is this really a supply and demand issue and we are so far removed from the rest of civilization that the suppliers can justify the prices?

Just why is it so much cheaper to deliver gas to all points all over the United States? Why are we number #1?

I can pretty much guarantee you press people that the following local issues in Humboldt County take a back seat to any of the gas price concerns, so quit reporting on these until you give us gas gouging answers: 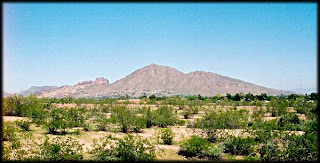 Robin and I went to Goodyear yesterday and watched the Reds against the A's. The A's won. Coco Crisp looks good, and Brett Anderson looks ready to pitch opening day. Red's Reliever Chapman was dealing though. Robin and I were sitting behind scouts right behind home plate with radar guns and Chapman was throwing 100 mph!

Saw former Arcata high sport stars Bob Mcrea and Jeff Menefee. Bob is living in Sparks and Jeff in Redding. Bob loves the Reno area and says he does not miss the mold. Bob has played no softball for 7 years now. Still probably has hundreds of more Home Runs than most.

Robin and I are staying at the base of the Camelback Mountain a few blocks away from downtown Scottsdale.
Posted by samoasoftball at 3/23/2011 4 comments:

Robin and I started our yearly trip to Arizona and drove in the rain Friday, lousy weather to Palm Springs on Saturday, car overheated on way to Phoenix......blah blah. Yesterday was the topper. We were watching the Giants and Rockies in Scottsdale and....were rained out. Looks good today though.
Posted by samoasoftball at 3/22/2011 5 comments:

Corporate Average Fuel Economy (CAFE) is huge subject for carmakers of all sizes. New federal requirements set to take effect for the 2016 model year require a fleet average of 35.5 mpg. As the deadline nears, which American car company can do as well as they did 30 Years ago? Here is the best gas mileage vehicles made by US companies in 1981 and earlier that topped the 2016 mandate. 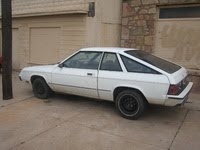 And there were many imports that were in compliance with the 2016 Mandate.

Even 20 years ago we had an ample American supply of cars that fit the 2016 mandate. So why all the whinning and crying by US car producers? They don't have the technology to improve on what they have already proven they can do? In 1982 there were 18 makes of cars that got 50 MPG on the Highway or better!
Posted by samoasoftball at 3/17/2011 12 comments:

The Eureka City Council will be deciding tonight on whether to reinstate the adult softball program. City staff is recommending a 28% increase in fees to cover costs. There is no plan at this time to include CO-ED softball. So I am asking all players who are interested in Softball to show up tonight at Eureka City Hall 531 K st at 6pm and when the subject comes up for softball, say your comments!
Posted by samoasoftball at 3/15/2011 4 comments:

David complemented the Humboldt District staff on doing a great job today of implementing our emergency operations procedures and working with the vessels from other ports. They worked from about 1am until the advisories were called off.

David reported an interesting experience today as the bay experienced water level fluctuations of as much as 5’ over a 10 minute period and a complete “tide” cycle in as little as 20 minutes. This cycle was repeated approximately 10 times between 8AM and 5PM. Interesting information.

(The photos are before and after of Banda Aceh Shore, Indonesia.)

Railbanking or Trains. Not both. 9,420 sign up to support Eel River trail.

When public comments started on subject not on the agenda, Environmental Protection Information Center Executive Director Scott Greacen let the NCRA Board know that he was not happy with the lack of transparency that he felt was lacking from staff. He outlined his grievances. Others thanked the board for showing up to Humboldt.

Discussion on whether to allow the Timber Heritage Association (THA) to have it's speeder on usable NCRA track for Samoa to Manila runs and Eureka runs for the Jazz festival and Blue's by the Bay became convoluted over liability issues and questions over the THA's motive for running the speeder. After much discussion, the board voted to allow the continued running of the speeder.

When discussion turned to Rail banking, Eel River Trails Association leader Chris Weston announced that he has signatures of 9,420 people who support the project of Railbanking and using the Eel River canyon as a trail! 6,000 of those signatures are from Humboldt County. He gave out his phone number and went around lobbying critics around the room after his three minutes. Many spoke in favor of the trail and trains in the future. Some landowner discussed the problems of people having access to their properties and the trash, environment and safety concerns.

Some confusion happened after Arcata City Councilperson Alex Stillman brought forward a letter (As did Arcata Councilperson Shane Brinton) to the NCRA about their Arcata to Bracut Rails & Trails project. It seems neither the NCRA Board or Legal Staff could agree on the definition of a proper Railbank. It seems the board felt it was an either or and never a combination of the two. That would once more cause a split in the community and have people having to take sides. Both Stillman and Brinton said they were pro-rail and wanted railroad rights protected for the future, but were open for railnaking discussion.

Sounds like the NCRA Board and Staff need to go back to the drawing board on this issue.
Posted by samoasoftball at 3/09/2011 19 comments:

Gas goes over $4 a gallon in Eureka. Because of Egypt and Libya? MY BUTTOCKS!

Help me understand this. Our largest supplier of oil is Canada, by a long shot. Between Canada, Mexico and Venezuela we receive over 40% of all our imported oil. We buy very little oil from Egypt (Ranked 31st of Suppliers to US) and Libya (Ranked 20th of Suppliers to US). Less than 1% of our total! So if we took both off the list all together, shouldn't we just have a 1% increase in gas prices instead of 10%? Are they just used as an excuse for these inflated gas prices? Even as screwed up as Iraq is, they supply 5% of our oil supply. Someone please explain coherently.
Posted by samoasoftball at 3/03/2011 8 comments: