Arkley's Home Poor Meeting. What was that?

So I went to Rob Arkley’s impromptu meeting regarding the home poor and was surprised at what a huge gathering it was. Biggest at the Wharfinger since…..the gala for the Marina Center a few years back. (No I didn’t attend that one, but I drove by out of curiosity) It was standing room only and some were left outside because of Fire Marshal rules. Rob gave a quick introduction and said he wanted to fix the root problems leading to homelessness and create a process for a solution.  He talked of Betty Chinn and Humboldt County Human Service Department and pointed out that ½ the budget and ½ of the workers of the County were part of Human Services Department.  He wants to form a committee to identify what programs are bringing people to Humboldt County and try to find solutions and hold the Board of Supervisors and Eureka City Council members responsible for answers to the issues. Then he passed the meeting on to his secretary Shirley. And she was overwhelmed and had no format to deal with the hour Rob had earmarked for the public to speak and go home to have dinner.


A first speaker came up to speak for the homeless and was not well received and didn’t make much sense.
The next speaker was handpicked, Rocky from the auto shop on 3rd next to the COOP. Said he has had the shop for years near soup kitchen but the last few years he had direct conflicts from transients every day and had witnessed assaults and dog killings. He said these people chose this lifestyle.  He has to pick up garbage every day and has noticed a drop off in female customers. He said he has had no problems with the Rescue Mission right next door to his shop.
Sylvia DeeRoy said that Arkley presented a false premise. Pointed out to Human Services cuts from the 1980’s. Said poverty was the main problem and the lack of affordable housing an issue. She also pointed out addiction and mental health as problems.
Mike Jones had a story of his youth and his experience of delivering papers in the neighborhood. He told of his shock over the recent cross bow murder. He talked about taking the ferry to Samoa to play on the beach and reminisced of a time where you could feel safe and not worry.
A lady named Sheri spoke of her 3 years in the soup line while homeless and her taking advantage of programs to now being on the cusp of graduating from HSU.
Jill McDonald spoke of her 23 years of experience working with old town and Main Street. She is concerned so much of the transients that she and her family have considered moving.
Joel, who identified himself as a Eureka Senior Counselor for addicts, said these people in the streets are human beings that needed to be held accountable for their actions.
One lady came to mic to talk about the Indian Massacre and to point out the intolerance of Humboldt County when they drove out the Chinese.
Another old town business owner (Bev Wolfe?) said she had 17 years of great business, but the last 5 years were horrible and she would have to move. She was tired of cleaning excrement, piss and vomit from her doorway.

Jackie Dueshel  pointed out the positive of community coming together to clean behind the Bayshore mall only to see it in disarray a year later and have transients hassle her while trying to clean this year.
Jeanie from Henderson Center had faith in the community but said this last year had a lot of “Tweaker” issues.
Kathryn said this was “Cause and effect” and we needed to be patient with people.
John Shelter let it be known that every person was a Human being and pointed out his track record for successfully cleaning and hiring Home poor. He did say there were more than usual out there.
Some observations:
There were protesters outside that were blowing whistles to disrupt the meeting, but most of the time they were drowning out homeless advocate’s speeches and pleas.


Not only was the forum unorganized, the protest against the forum was spotty at best.


Many of the people at this forum were people I do not normally see at any political events.


It is alarming that this subject has such a large impact to cause this much concern.
Has the problem escalated the last few years? I believe it has.

What is the answer? That is a huge question. We need to address little issues before that big things. I have been public in the past of the need to have Social Services put B & B’s out on the Peninsula and behind the Bayshore so Home Poor citizens can at least go to the bathroom in dignity and not cause environmental issues in our coastal wetlands and beaches.

The first order of business at this month North Coast Rail Authority meeting was actually a revisit of a proposed Agreement with Parallel Infrastructure for property audit services to audit encroachments and Right Of Ways (ROW).  Minor changes were made to this heavily worded agreement, but hopefully this will give the district a better understanding of their assets.  The vote was unanimous to approve of the agreement.


The second item on the conduct of business was possible approval of “Update to Policies and Procedures” for Fee Schedules.  The fee schedules are for property owner’s costs to use the NCRA ROW to access their properties. This would be separate of Parallel’s scope of work.  Some of the agreements date back to the 1920’s and are very minimal and some the NCRA has not received any compensation. Uses for the ROW’s by private owners and public agencies are negotiated on a case by case basis.  Between Windsor and Willits there are 260 agreements. There was a question of what the market will bear or tolerate and whether we were current on the agreements. I asked for this item to be referred to the Property Committee to design a baseline standard boiler plate “Fee Schedule.”
The third item was concerning the sale of11 acres of excess property near the Ukiah train depot. We are trying to sell 4.5 acres of property to the state Administration Offices of the Courts (AOC) to build a new Mendocino County Courthouse. The project has now been whittled down to 3.7 acres. The actual liable entity for the clean-up of the site is Union Pacific, but it was determined the legal action to force them into clean-up would delay the process to non-existence.  The clean-up costs are being paid by North Western Pacific Company (NWPco) and Cal Trans is has been promised the first 10% of the sale to reimburse funds for the original property acquisition.  I asked the operator of NWPco what the threshold was for cleaning up the site. He said there was no threshold and would make sure the land is cleaned up.  The site could be worth upwards of 10 million dollars. A presentation by the NCRA to the California Transportation Commission (CTC) will hopefully move the sale forward in the near future. Much of the proceeds from the sale will go to NWPco for payback debt incurred by the NCRA to the operator of the rail line.
Item four was a request for additional speeder event to the Apple Festival in Fortuna. Mayor Doug Strehl made the motion and I seconded and the motion passed.
NCRA Property Specialist Doug McCorkle reported on the failed TIGER grant for rail expansion. Out of 530 submitted applicants only 37 were awarded.
Operators Report: NWPco Operator John Williams announced that NWPco received the “Jake Safety Award” for short line rail. NWPco has been doing work for SMART south of Guerneville digging 42 inch trenches for conduit. He announced that all other SMART work has been curtailed until well into next year. NWPco has picked up more business in the grain industry, but lags in lumber. They are still operating at a loss according to the operator. The goal short term is expanding service to Cloverdale and then growing to Redwood Valley where the operator has identified substantial traffic base in the form of Lumber and aggregate. Mr. Williams said there is rumblings that SMART may try to expand to Healdsburg.

Mr. Williams would like to see an excursion train on the Northern end of the line. He felt the least expensive track to do this would be from Eureka to Fortuna. His second pick would be Samoa to Arcata. He would really like to see freight service around the bay but admitted he had not identified product.
Posted by samoasoftball at 9/12/2013 5 comments:

City of Eureka looking for help at over $15 an hour!

The City of Eureka is looking for teams for this coming fall Basketball League for adults. League starts in October. They are also looking for Referees and are paying between $18.20 and $22.12 per game based on experience. I have played nearly 40 years in this league! 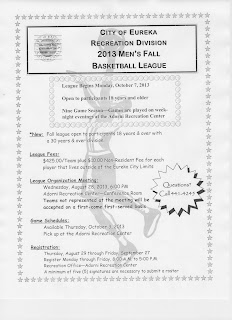 State of Jefferson coming our way? 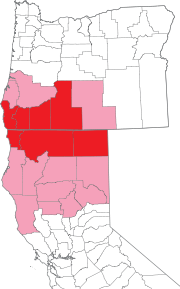 The state of Jefferson is a great discussion subject and has a bit of romantic fantasy, but is this practical? I get a felling this subject matter will come to Humboldt in the near future since Siskiyou County has voted for secession from California due to their perception of non representation at the State government level. Don't know how I feel about that.
Posted by samoasoftball at 9/05/2013 7 comments: