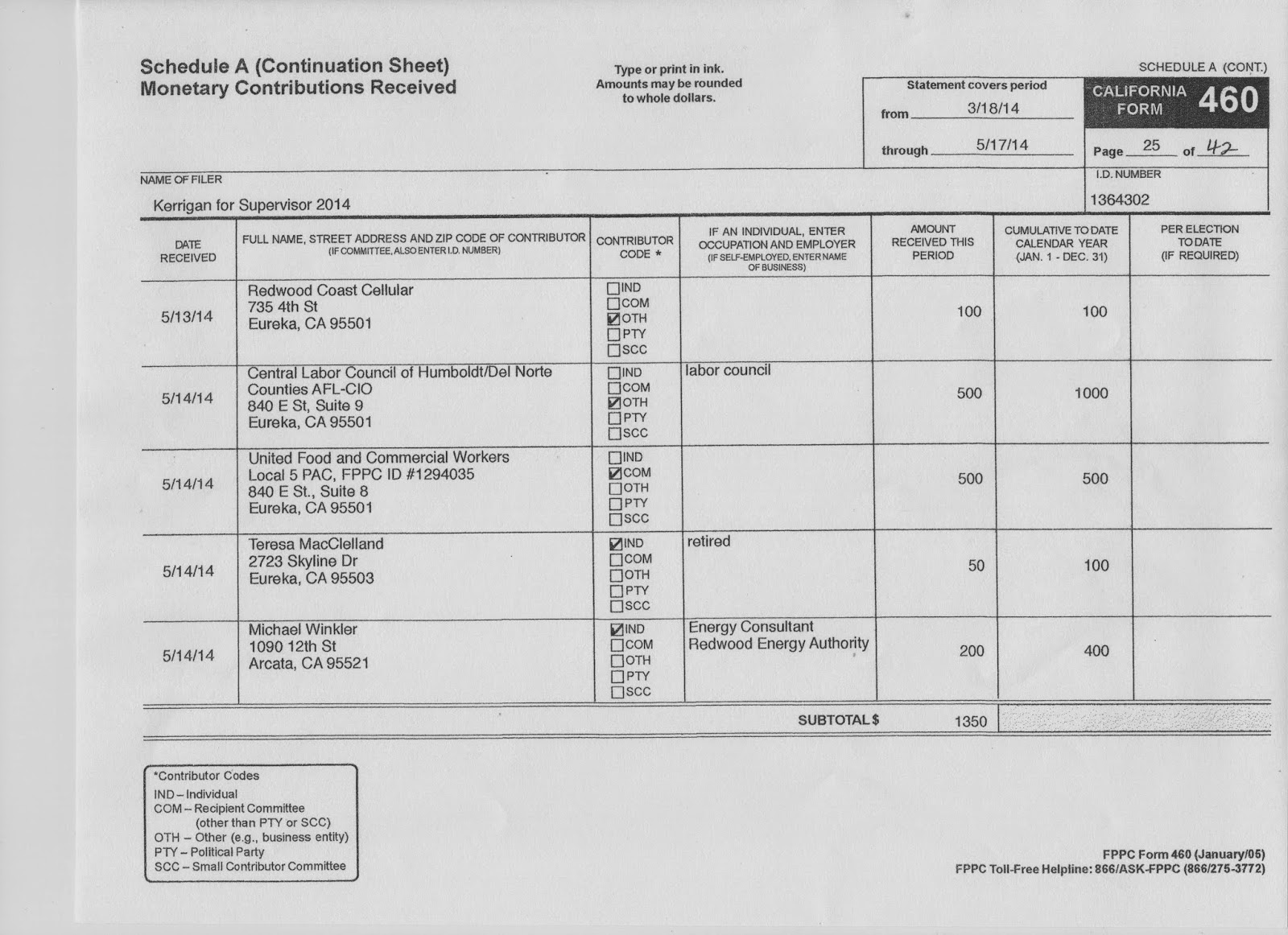 Kind of hypocritical that the Chris Kerrigan campaign has excepted $500 from the United Food and Commercial Workers local 5 and $1,000 from the Central Labor Council of Humboldt and Del Norte Counties and decided to spend that money for a fund raiser at WINCO.
Ironic that Virginia Bass pretty much exclusively shops Safeway on Harris. A Union shop. Who are the hypocrites here?
Yes. This is true. Don't ask me, ask Chris. He will not deny.
Click on forms to read. 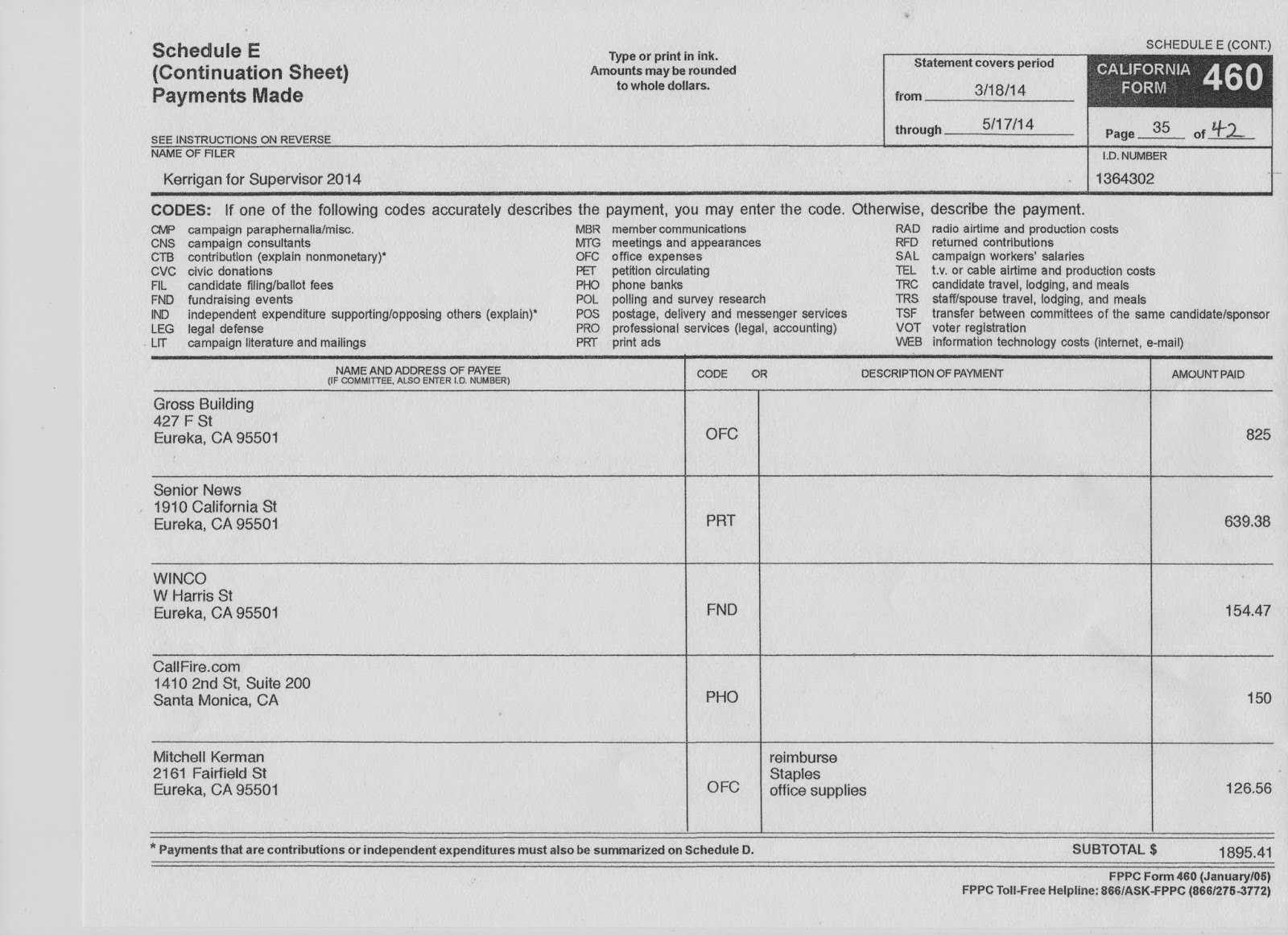 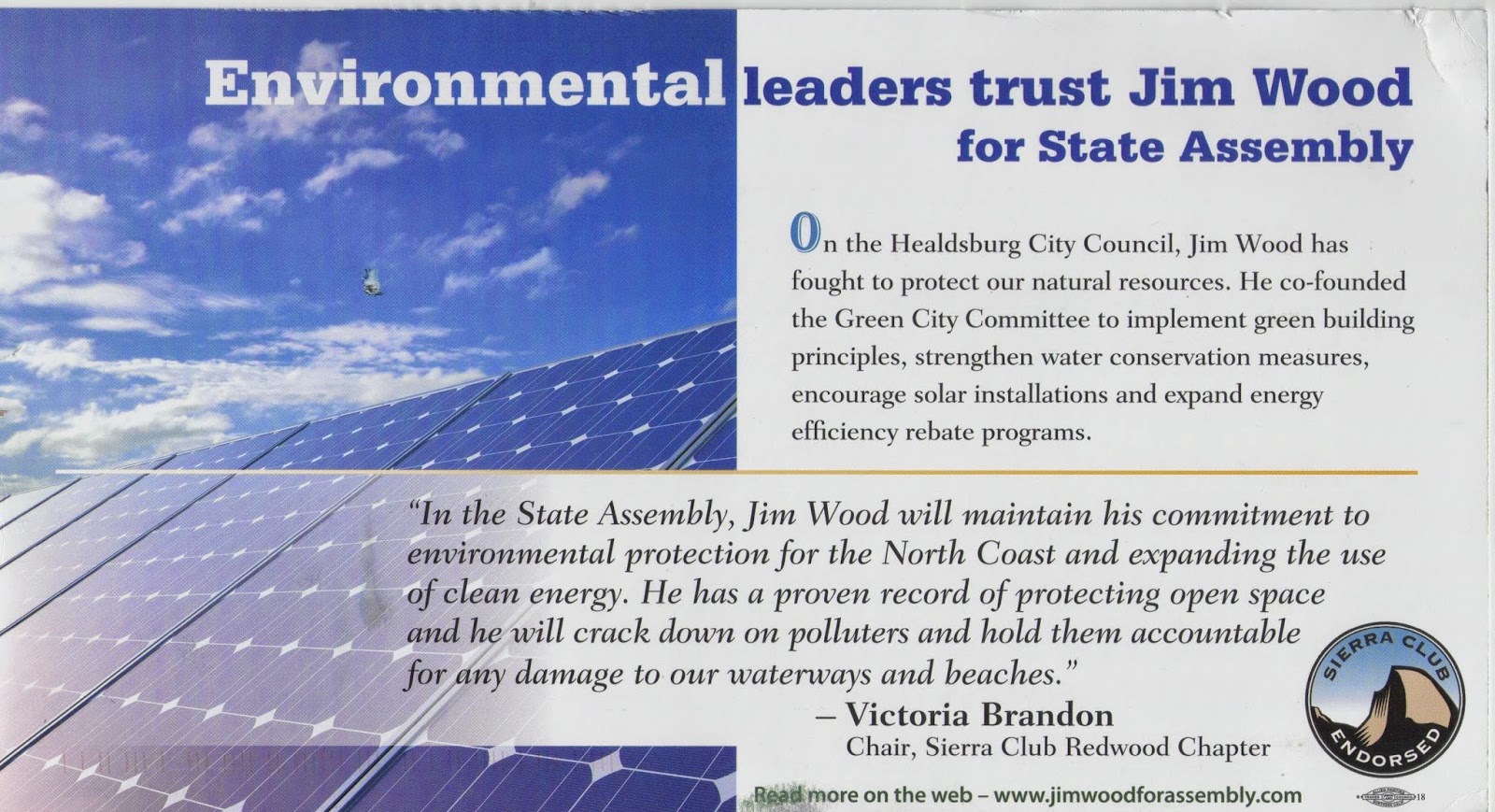 I am sorry, but this was a total waste of money for the Jim Wood for Assembly campaign. The message was weak, it was visually blah, font wrong, timing awkward (right between Absentee and Poll Voter timed) and just very amateur. I expect more from a big time legislature campaign.
Posted by samoasoftball at 5/17/2014 No comments:

(Leo Sears requested that print his Letter to Editor in it's entirety. No problem Leo. Virginia is my choice too!) 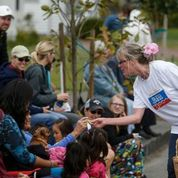 “There’s a big difference between running for office and actually governing,” Judy Hodgson wrote two years ago in reference to Supervisor Virginia Bass. As one of the many “giving kudos to Bass for chairing an emotional discussion, keeping everyone civil, and for finding a solution – a way forward,”  she concluded: “That’s leadership.”
Or as the MTV generation might say: she was way awesome at walking the walk, not just talking the talk.

What impressed everyone that day was, I’m sure, first developed and honed by her father’s example and tutelage and, upon his death, by stepping into his shoes. Virginia is, in many ways, her father O. H. Bass’ daughter, because hard work and a dedication to community minded service seems almost inbred in both of them.

O. H. went into the restaurant business in the late 40’s, culminating in the opening of O. H. Townhouse in 1966. Famous for its prime rib and onion rings, its restaurant and lounge seated 200 with a regular staff of 25, and seated  250 more on its banquet room. This is where Virginia began her waitress career at 15.

The waitressing continued through high school and college where she graduated from HSU with an Honors degree in Business Administration in 1986. This is the same year her father died and the responsibility of managing the business grossing a million plus fell on her shoulders. She managed O. H. s for the next 31 years and became recognized as a statewide leader in the industry.

But being her father’s daughter doesn’t stop with the restaurant. In addition to supporting most every community endeavor, O. H. found time to serve as a county supervisor – the seat now held by his daughter. Virginia was elected twice to the Eureka City Council, then as Mayor and as a County Supervisor where she is up for reelection.
Eureka Mayor Frank Jager is one of those with kudos for Virginia. “I was a Councilman when she was Mayor,” he said, “and I always admired her talents at conducting our meetings. She had a rather unique ability to keep everyone civil and moving toward solutions no matter how passionately issues might be pulling them in different directions.”
Everyone going to O. H.’s would see Virginia, with plates stacked along her arms or perhaps balancing a tray over her head, taking orders, chatting with everyone – a waitress extraordinaire. What they would not see was the Virginia that was also responsible for all the 101 thing big and small that make a day to day operation run smoothly, as well as the responsibility of hiring, firing, training, payroll, bookkeeping, personnel issues, on and on - managing a successful small business is almost without respite.
“I made a living fishing,” said retired Supervisor Jimmy Smith, “and I have a deep respect for those who’ve experienced making a living through hard work and running a business.”
“My district adjoined hers” he went on to say, “and we always acted as a team in representing the people of Eureka. That sort of teamwork started when she first became a Councilwoman. She’s always worked toward cooperative efforts to serve the public – as Councilwoman, Mayor and Supervisor; it was always a pleasure working with her.”
If you ask Jimmy’s replacement Rex Bohn about who represents what part of Eureka, he will tell you that “you get a twofer” because he and Virginia work as a team – just as she did with Jimmy.

We have a Hot Dog Wiener (Winner)! Tie between DJ's and Toni's. On to Taco Salad.

The first stop for the Steve and Richard critic team was Pachanga Mexican resturant. It is across the street from Burger King on 5th.

1. The Taco Salad itself-Steve had the ground beef and I had the chicken. Very good at the top. As you got further down just so so. But there was no tell tale wet soaked bowl at the bottom so that was a plus. Rating: 3.75 out of 5

2. Ambiance-It was very nice. We had window seat and it was a comfortable setting. Rating: 4 out of 5

3. Extras- They have chips with hot salsa and a cabbage based dip. Not a big fan. We ran out of chips and they promised to bring more. Didn't happen. Need to maybe serve little sour cream with those chips. We did have a couple of Poppers for apetizers that were really good.  Rating: 2.5 out of 5 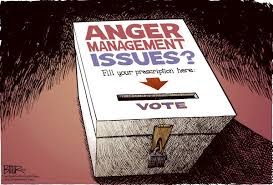 Robin and I vote by mail. I fought the change over to absentee around 20 years ago publicly. I took issue with Linsay McWilliams whom arbitrarily (I felt) closed our very successful Polling precinct at Peninsula Elementary School. He said we were under 250 (We were at about 240 at the time) voters and that didn't justify continuing the poll. We had one of the largest % turnouts back then because of the social aspect and Samoa was a mill town. But there had been some issues with the polling workers and I thought this was just a way out of handling it. Now I have gotten used to voting at home and having discussion with Robin over issues. We agreed mostly.

If "Progressives" or "Liberals" really want campaign spending limits, why do they support the very candidates that refuse to agree to "Volunteer Campaign Spending Limits?" I am speaking of Jerry Brown and Gavin Newsom of course. And the lefties keep carrying on!

Roy Allmond, Republican for Secretary of State, "...with firm reliance on the protection of divine Providence, I pledge to you my Life, my Fortune, and my sacred Honor!"

Alex Padilla, Democrat for Secretary of State, "That's why he is visiting all 58 California counties to meet with voters......." Now wait just a second. Do you really think Alex is going to Del Norte or Modoc counties. Or even Humboldt for heavens sake.

One rule of thumb about campaign statements that differ on local elections and state elections, if you don't have a campaign statement for a local election it is the kiss of death. But at the state level the heavies don't fill one out. It would show weakness that is beneath them. Thus none from Jerry or Gavin. They have too much money in their war chests to worry!
Posted by samoasoftball at 5/11/2014 5 comments: 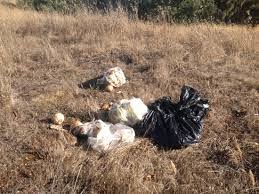 
We all know that illegal dumping and litter are significant problems in Humboldt County. Humboldt Surfrider and the Northcoast Environmental Center have been focusing on the Samoa peninsula in particular as a place to implement change through beach cleanups, the Adopt-A-Beach program and by supporting the dedication of the PacOut Green Team.


The PacOut Green team (sponsored by Pacific Outfitters) spends one hour every Saturday cleaning up the beach, highway, bay and surrounding areas (with the occasional foray into Eureka). We'd like to help ensure they have supplies and a way to dispose of the trash without incurring fees.
We'd also like to address the larger issues of people dumping on the spit by working with the proper agencies on notification, enforcement and cleanup.
We're hoping to involve businesses/agencies/other organizations in stewardship of the peninsula through the Adopt-A-Beach program and/or sponsored cleanups.
By the end of the day, I'd love to have a clear idea regarding the following:


Who wants to help take care of the beaches?
What should a person do when witnessing or discovering illegal dumping?
What businesses would want to sponsor the PacOut team and/or other beach cleanups (through Adopt-A-Beach, etc.)?
Are any business, landowners, etc., interested in supporting an educational campaign?
What other ideas do people have as far as preventing dumping, littering, etc.?
Posted by samoasoftball at 5/09/2014 No comments:

So let the Softball Insanity begin! 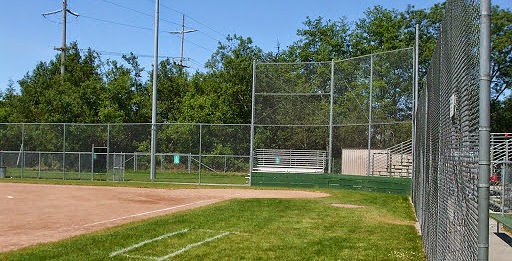 The first  general meeting for the 2014 Summer League for Mad River Softball Association is upon us! May 19th in the Arts and Craft room at the Arcata Community Center at 6pm. You have 2 weeks to find a team representative to be there!
League fees are due by June 4th at the Arts and Kraft room and are $335 for Team Sponsor and $50 per player for 12 players minimum or $935. Each additional player over 12 is $25 per player.


Please pass on this information to any of your softball buddies! Contact Richard Marks at 707-445-3432 or  Samoafog@aol.com. Check out Mad River Softball Association.
Posted by samoasoftball at 5/05/2014 No comments: