Humboldt Rockets helps Babes Pizza! Then gets put in place! 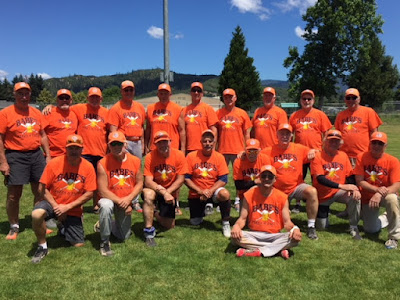 The Babes Pizza North Western championship team was trailing in the Northwestern 63 and over softball league to a Grants Pass team that was 10-0 and facing my 0-10 Humboldt Rocket team. We had many close games but were just coming up short. Humboldt Rockets coach Dave Lonn had a pre game speech where he said he would rather lose than not play, but he would prefer that we not make mental mistakes and play our best game. And we responded with a 17-15 win over the undefeated Grants Pass team! Then we beat the Desert Dawgs from Bend Oregon for our second straight win. We played Babes Sunday morning and they took us out 17-2. Ouch. For our team Dave Lonn only made 1 out in 5 games. Scott Wooley and Jeff Powers only made 2 outs. Larry Kuwahara hit well. Babes players, Jay Jones, Dave Denoma, Barry Oliver, Mickey Ayala (5 putouts at pitcher), Dennis Costa, George Lorentzen did good. It was nice to see Jack Nash, Jack Eldridge and others.
Posted by samoasoftball at 6/16/2019 No comments: 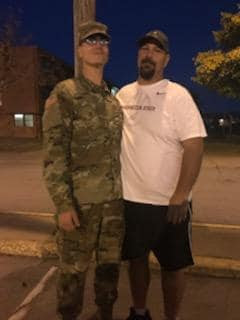 My Marks Consulting Senior Softball Team played Porter St. BBQ last night and Bill Sines hit a ball estimated at 400 ft! He also hit another Home Run that wasn't as impressive. We fell short 14-10 but it was a fun game and sometimes chippy.

I have known Bill for years and love to have him as a teammate. He is about 6'8" and over 300 lbs and plays second. We have Mike Yancheff at about 6'5" at short and Ron denHeyer at 1st at 6''6". Not only that, you add Mickey Ayala Pitching and Tom Marking at 3rd out infield averages 62 years old!

One thing I appreciate about Bill is you get no bull. We have had long conversations about life, family and community. Oh, and lots of local sports talk.

Above is a pic of Bill with his son Jesse who is serving our country in the Army.

As a side note, there are about 130 Humboldt Classic Senior Softball Association softball players playing on 10 teams out in Samoa. That is as many teams as the City of Eureka's mens league! Check out HCSSA!
Posted by samoasoftball at 6/06/2019 2 comments: