SOP beat The Diggin's from Weaverville 12-10 to win the First Annual "Scatman" Memorial Tournament. Long time Weaverville softball player Mike Scatina passed away this winter from cancer and the players from Trinity County decided to do this tournament in his memory. 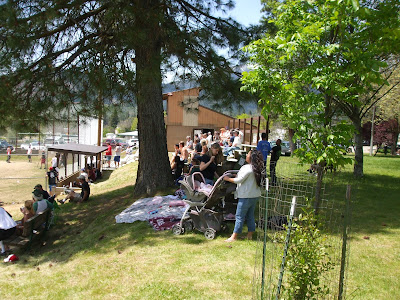 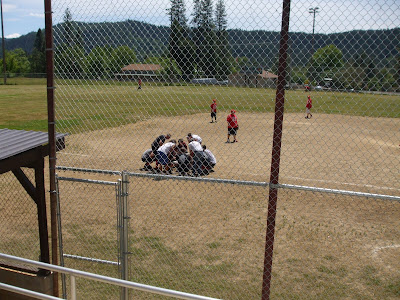 Madden Paint from Redding tied for 3rd with the Young Guns from Weaverville. Samoa Athletics tied for 5th with the Booze Hounds of Trinity. We scored over 50 runs in 3 games and could not crack the top four! The money raised from this tournament is to help the Weaverville softball league with repair costs so they can run their league. In the bottom picture, players from the Diggin's gather at 3rd base to pay homage to the "Scatman" before their game with bitter rivals "Young Guns" of Weaverville. It was an entertaining weekend to say the least.
Posted by samoasoftball at 5/31/2010 No comments:

And yes, we all got along fine. I know there is a perception out there that we are all split up and fractured, but all members were active and helpful for this event. Special Thanks to our Chair Milt Boyd and Chicken by the Sea co Chair Pam Cahill for a fantastic event. Hundreds of people from all parties came out and enjoyed the day. Fourth District Supervisorial candidates Virginia Bass and Bonnie Neely were both in attendance as were all DA candidates. 5th District Supervisor Democratic candidates Patrick Cleary and Patrick Higgins gave speeches. Virginia served food side by side Eureka City Councilman Larry Glass and Councilwoman Linda Atkin prepared food as she has done in the past for the Committee. Roger Smith led the BBQ Grill with his wife Patricia with Mike Finley and I helping get in the way. Charlene Cutler Ploss, Pam Service, Robin Marks, Isabella Phipps, James Topping, Julie Timmons, Andy Bird, Matt Owens, Brendan Wagner and many others I am sure I am overlooking. "It takes a village" to do this type of event and it did. HCDCC Treasurer Phillis Seawright was ill and could not attend but took care of the "behind the scenes" financial and organizational issues that have to be dealt with. Get well soon Phillis and great job by all!
Posted by samoasoftball at 5/23/2010 3 comments: 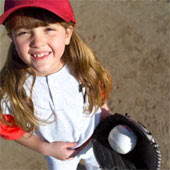 Friends, Neighbors, & Baseball Fans of Mckinleyville:
We would like to invite you all to our First Ever Baseball Fun Night: To Benefit our baseball and softball program: Raising money for batting cages at the park is one of our main targets this season.

Dinner& Auction on Tuesday June 1 at Cher Heights Casino in Trinidad:
Must be 21 or older:

Please help us out and come have dinner and a fun time with you friends, neighbors, family and many other baseball fans in our area. We invite former families of our program and other programs in our community of friends. Mr. Rex Bohn is hopefully going to be our MC for the night and he always makes these events a fun night for all attending!
Tickets can be bought from any player/family, board member and I always have some with me as well.
Please consider this invitation and join me and others making this a huge success!

Thanks in advance,
I hope to hear and see lots of you,

Perch'n on the Peninsula! Results. 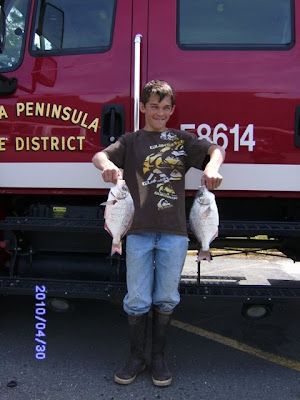 There were a total of 37 tournament participants of which only 9 returned by the deadline with fish, we had several more participants return without catching fish, approximately half of the participants did not return at all. 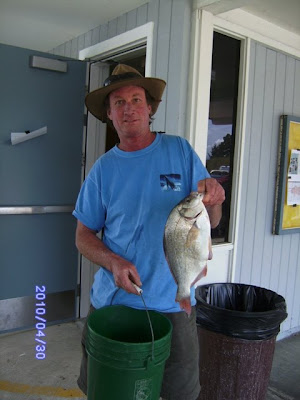 Thank You to all the Samoa Peninsula Fire District Volunteers who helped make the perch'n fundraiser a success!
Posted by samoasoftball at 5/13/2010 4 comments:

Clyde Edward Albert Jr., 62, died early Sunday morning at home. Ed dedicated his life to service, both to country and community, and will be greatly missed by his family and friends. Ed was born in Butler, PA in 1947, and lived there until joining the Air Force at age 17. He served three tours of duty in Vietnam, where he met his wife Ann, and learned to program computers. Later, Ed was stationed at Kadena Air Base in Okinawa, Japan, and then, upon returning to the States, worked as an Air Force recruiter in the Humboldt area.

He retired from the Air Force with the rank of Sergeant Major after 20 years of service. While in the Air Force, Ed completed his B.S. degree from the University of Maryland in Computer Sciences. After military retirement, he utilized the skills he learned in school and in the military to obtain employment as a computer programmer for the counties of Lake and Humboldt, and later Humboldt State University. Ed was an active member of Council 57 ASFCME.

Ed was also an active member in the Veteran's Foreign War Post Local 1872. When he retired from the state university system in 2007, Ed pursued his long-time interests in genealogy, photography, bird watching, and geo-caching. He also continued to be of service as a member of the county Grand Jury, and helped North Coast Stand Down support local veterans. Ed is survived by Ann, his wife of 40 years, his son Robert, daughter Joyce, sister Kay Neely and brother Doug. There will be a viewing at Pierce Mortuary on Thursday, May 5th from 3 to 7 PM. The funeral service is 11 AM, Friday, May 6th in the Veteran's section of Ocean View cemetery. Care is under the direction of Pierce Mortuary, 707 H Street, Eureka, California. Please sign the online guestbook at www.Times-Standard.com. Click on obits. 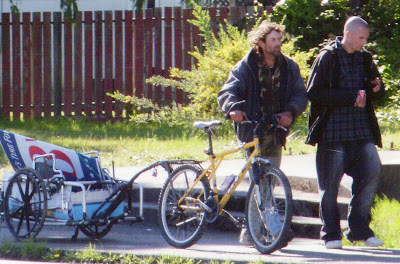 NOT COOL! I know that all political campaigns have the sign attrition thing happen. Fingers get pointed and accusations fly. But we just so happened to have a person with a camera witness a sign removal and took a picture of the perpetrators. This person was threatened by these two crass offenders who were pretty ballsy to do in broad daylight. And this is after other eye witnesses seen others. One was an elderly lady that called the Bass campaign after she said someone in a black Honda pulled over, a young lady jumped out, opened her gate and took a sign and jumped in the car and drove off before the elderly lady could get the license plate number! I was texted this picture with a shopping Kart on K ST someone was collecting our signs with. Again, in daylight! And we are estimating nearly 100 signs gone! We still have many hundred out there, but that isn't the point.

Has someone put a bounty out there on the Bass signs? And if they did, how can they sleep at night? So please, if you know these people above, please call the Eureka Police at 441-4060 with information. Upon the arrest and conviction of those guilty, the Bass campaign will reward the informant $500. Maybe this will be a deterrent for future sign shenanigans. 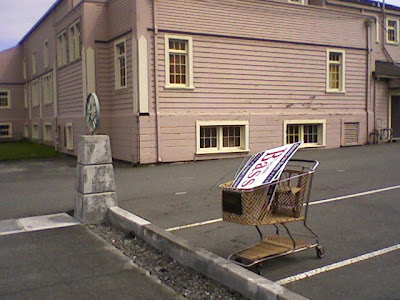