Homeless and Panhandling in San Francisco and Eureka. Bits and pieces. 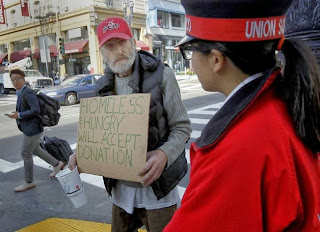 The SF Chronicle does a great story on panhandling in San Francisco.


146 people quizzed about their lives as part of a concerted effort to better understand the panhandlers of Union Square, how they came to be on their designated street corners, why they panhandle, what they do with the money, and what it would take to get them off the streets. The Union Square Business Improvement District conducted the survey in the 27-square-block shopping area. Fifty-eight percent of the panhandlers said they've been begging for at least five years despite the wealth of social services available in San Francisco and the city's Homeless Outreach Teams, which patrol the streets daily offering help. Sitting on the sidewalk is no longer allowed under city law while Panhandling in SF. Contradicting the common refrain from city officials who say the majority of panhandlers are housed, 82 percent of those surveyed in Union Square said they're homeless. They said their biggest obstacles to getting a place to live are that they have no job and no income and can't afford rent. Permanent housing, food and job training would help them to stop panhandling, they said. Just 3 percent said they don't want housing - also contradicting conventional wisdom that says many people flat-out refuse offers of housing. "Something's not working someplace along the line," said Tim Falvey, a member of the business improvement district's board. "Either they're not getting connected with services or the services aren't working for them. People do need shelter, and they're not getting it. ... It's an eye-opener for us. "The survey found that panhandling in Union Square is a lifestyle, not a once-in-a-while kind of thing. Fifty-three percent of panhandlers said they beg seven days a week. Sixty percent said they earn $25 or less each day, while 27 percent said they earn up to $50.  Asked to list everything they spend their money on, 94 percent said food. The second most common answer was drugs or alcohol, cited by 44 percent. A quarter of panhandlers said they're alcoholics, and 32 percent said they have a drug problem. Seventy percent of those who fell into either category said they've participated in treatment programs.
Who receives

58% have been panhandling for at least five years


95% live in San Francisco
Who's giving


61% are concerned about how panhandlers use their money
In Eureka there is a different dynamic of population but I could see some of the same principles applying. Panhandling and Homeless seem to go hand in hand. The burden on services takes a toll when homeless are transient and move ready. There were 71 calls to the fire department for “camps” and 20 tons of debris eradicated just last year.
Some Info on Eureka Homeless and Humboldt County poor from various sources:
60% of homeless in Humboldt County live in Eureka
70% of homeless make less than $1,000 a month
66% of Humboldt Homeless became that way locally
$303 a month is Humboldt’s maximum General Relief. Only 165 people were collecting as of Sept. 2013. Around decade ago there were well over 600 collecting
There are only 1,631 families currently on welfare, down over 400 from about a decade ago
The Transportation Assistance Program (TAP) seems to have helped our area a little. Betty Chinn has reportedly sent around 50 homeless a year back to their home towns.
Here is the big question concerning homeless and panhandling, “Is it worse than it ever has been?” I would say by simple observation yes, but we need to measure that subject better. “What is the cure?” If I had the answer I could help the thousands of other communities who are dealing with the same issue.
Any of you have any answers?
Posted by samoasoftball at 10/28/2013 11 comments:

HSU Basketball in for long season.

Perry Price and I went to watch the scrimmage between the current Jack and the alumni. Final score 87-70 old guys. I mean, some alumni haven't played in a decade for HSU. Here are somethings they need improvement:

> Don't force passes creating turnovers!
> Go shoot some free throws!
> The Three's ain't working, take it to the hole!
> Hands up down low, no gimme layups!
> Can anyone on this team set a pick?
> Rebounding and down low length will be a key weakness.

It was nice to see local players Will Taylor, Chris Pender, Parker Farris and Dylan Ingersoll will be on the team. Taylor may find significant time on the court this year. Farris had an off night and I am not sure his shot selection was all that great. Pender and Ingersoll didn't get that much time on the court to evaluate.

I was complaining to Perry about Allen Guei playing the whole game on the point and was wondering why Coach Kinder didn't put someone else in to see how they might do. Well midway through the second half he took him out and I saw why Allen was in all the time, no backup at the point! It seemed there were many on the bench that didn't get much playing time. Don't you think a scrimmage against the alumni would be the time to really check out a players potential?

Freshman Jordan Mackie had some bright spots and some freshmanny type plays. David Howard is a leaper who will be entertaining to watch.
Posted by samoasoftball at 10/26/2013 No comments:

Humboldt Bay the only "High Health Certified" Bay in California! 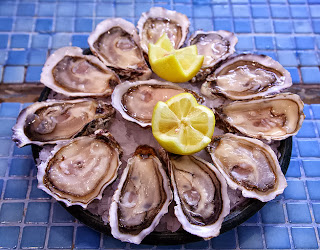 That means that we have the only California bay that Oyster seedlings may be shipped to other areas. And there is a growing need all over the west coast for seed!

1. Currently bay oyster businesses bring in about 9.4 million dollars to Humboldt County. Should greatly exceed 10 million in the next few years.

2. Within the next few years there will be over 110 oyster related workers on Humboldt Bay.

3. The Humboldt Bay Harbor District is finalizing a project that will create "One Stop Shopping" permitting processes for oyster farms to streamline "Creation of Jobs!"

5. Upcoming tours of the projects on the bay will give tourists one more reason to stay and enjoy Humboldt County!

HSU President Richmond pointed out that 60% of all food for human consumption is produced from the ocean. To maximize Humboldt Bay's ability is forward thinking for our region.
Posted by samoasoftball at 10/24/2013 3 comments:

Samoa/Finn Town/Fairhaven becoming one? Community Service District that is. Manila votes no to annex Samoa!

Last Thursday the town of Manila voted unanimously against annexing Manila with the town of Samoa. LAFCO or the Local Agency Formation Commission has a decision to make in the near future as they are the agency that will have to pencil out whether it makes sense for the Samoa Peninsula Fire District (SPFD) to become a Community Service District (CSD) operating the whole Peninsula from the 255 Samoa Bridge south. This has been an on going topic out on the Peninsula, dating back and even before I was a Director on the Samoa Peninsula Fire District Board. Last week the (SPFD) voted unanimously to continue the process to become its own CSD. This is in partnership with Danco Properties and their plans for a new housing development in Samoa. To build out Samoa, Danco needs the creation of a CSD to fill the criteria of a new water treatment facility and a other community services such as water delivery and Parks & Recreation. Overall plans will add up to 400 new houses. It sounds like the plan is changing its phasing processes. Phase "5" will actually be first phase and start developing on the south end of Samoa near the "Samoa Block" with an added mix of 100 affordable single family residents and apartments this summer of 2014.
Posted by samoasoftball at 10/21/2013 6 comments: 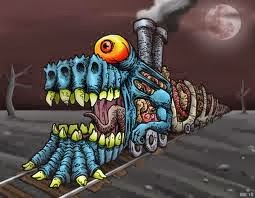 
A Presentation by NWPco. Operator John Williams began the meeting of the North Coast Rail Authority (NCRA). Basically Mr. Williams updated or gave a progress report on the Ukiah Depot Remediation Project.  The $250,000 project now looks to be around $350,000. Mr. Williams again assured he was going to clean the land no matter the overruns.
It was pointed out in the financials that the NCRA is currently $1,091,184 in debt to NWP.co in just interest.
There is a log deck in Willits that is putting 1,500 Hem-Fir logs a month into containers and trucking to Oakland for shipment to China to build forms for a dam project.  The may need 3 million board feet of wood for the project and stumpage fees have went from around $300 to over $600 a stump.
A proposal for fiber optic lines in Mendocino County and Humboldt may be coming soon from Golden Bear Broadband to the NCRA.
NWPco Operator John Williams reported a stoppage in service due to a replacement bridge being built. The contractor and NWPco came to an agreement of 10 days for construction, negotiated from an original 18 days. Another 3 bridge’s south of Petaluma are earmarked for replacement in the future and similar negotiations are expected.
Marin County NCRA Director Bernie Meyers announced he would not be seeking reappointment to the Board and gave a scathing analysis of the conduct of the NCRA as an organization.
Posted by samoasoftball at 10/10/2013 6 comments: 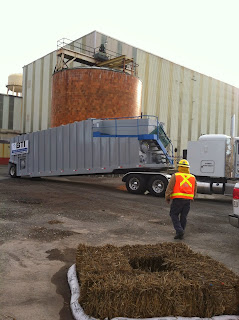 The Federal Environmental Protection Agency has taken over the Harbor Districts recently acquired Pulp Mill. They are going to make sure the property is cleaned up properly. The site is considered a SUPERFUND pollution hazard and is on the fast tract for clean up. Then the Harbor District and the local community can put the property into the best use. And yes, the EPA workers are working through the government shutdown due to the urgency of the spill threat to our ocean and bay.