Why is it that 90% of all public restrooms are such a disaster? Is it just a very small percentage that seem to have to defile a public toilet, or is this a majority thing? I have had to clean up my share of bathrooms running athletic events and I can assure you that this not just a male thing. If anything, it seems that women are even worse. I just don't get it. I really don't think people treat their own bathrooms like this, or do they?
Posted by samoasoftball at 7/29/2010 11 comments:

The State Water Board unanimously voted to approve the NPDES permit to allow Freshwater Pulp to start the mill. This was the last large regulatory hurdle for the Pulp Mill to surpass. Congratulations to Bob Simpson and may many workers soon start back to work!
Posted by samoasoftball at 7/15/2010 12 comments: 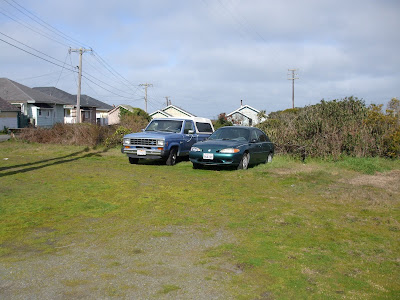 Robin and I purchased the 98' Mercury Tracer in 1999. It had low miles and I needed something dependable to drive while I was organizing for the Association of Western Pulp and Paper Workers. Robin was surprised I picked out a "green" car, as I had heard they were unlucky. (Used to not see green stock cars. Urban myth?) Anyways, the car piled on over 200,000 miles between me, kids and friends (borrowing). It had been in a few fender benders along the way, and was totaled twice! (Always people hitting it, never it hitting them.) The last one left it pretty much not worth fixing so I decided to donate it to Car4Causes. They made it easy. They said they would pick it up, but I told them I could drive it to wherever they needed. They seemed surprised and they told me John's Used Cars and junkyard was their point, so I drove it over there and they seemed surprised I was donating a drivable vehicle. Anyways, I have donated cars to either St Vincent DePaul or friends in need, and this was the quickest and easiest I have experienced.

And none of us heard a thing. Our Uniontown used tire softball team had just finished a 12-8 win against Big Pete's pizza team and we were all in the parking lot while the field rep shut off the lights. Out of the dark came a young lady who asked one of our umps for a cell phone so she could call her dad and tell him she was raped! The ump and the field rep went running to the woods to see if anyone was around will the police were called. One of the lady players in the league who is a trained nurse tended to the upset young lady until the Arcata officers showed up within minutes. (I was over with the Betz Bombers team talking softball past and was wondering about what all the commotion was across the parking lot.) Then the Ambulance and Arcata Fire Department showed. Two of our umps and field rep found a guy spun out with a pair of women's panties next to him in the wooded area behind the fields and held him up until officers took over. The young lady said 3 men were involved. I was able to turn the field lights on so the ambulance could make it's way to the guy. He became belligerent and put up a fight. At the same time the young lady, who was waiting in the back of the police car started to try to kick out the windows, so I went and found the officer of that car who was helping with the spun dude. While they were trying to calm the guy in the ambulance he started spitting on the EMT and pissing all over. He started yelling, "Don't you know who my father is? He is going to kill you!" Then he started chanting loudly, "Beelzebub, Beelzebub, Beelzebub, Beelzebub!"

This whole thing was like in slow motion and surreal. What is going on in our world, when this kind of evil is so close to real life? Just a bunch of softballers having fun and playing ball after work within feet of druggies doing what they do, making life hell on others. When I left (just about a half hour ago) they were still looking for the other two suspects and officers were abundant. Thank God for the quick response of the Arcata police and the Arcata Fire Department.

The Mad River Softball Association Field Representative and Umpires deserve an award for their role in this craziness.
Posted by samoasoftball at 7/05/2010 11 comments: