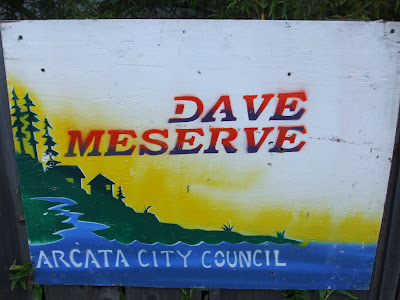 1. Dave Meserve-All over Arcata you can see these individually painted signs. By far the best signs in Humboldt County.

2. Marian Brady-You might not like the Brady Bunch theme, but you have to admit that those round signs are flashy and well done. Stands to reason. Marian is a graphic arts designer.

3. Alex Stillman-Kind of quirky but it works. The old style theme, or whatever it is, just is kinda mellow.

4. Mike Newman-These signs stick out like a sore thumb! You can't miss them and the little man in the middle is different.

6. Paul Gallegos-Repeat signs that have worked in past. I guess they are thinking, "If it ain't broke, don't mess with it."

8. Larry Glass-Shouts out like a conservative, but this candidate is way left.

9. Frank Jager-Recycling signs Ala Gallegos, and these colors really force you to look.

10. Ryan Sundberg-I like them and hate them. I don't know why. They are different.

Just missed the list: Bonnie Neely signs. Soft color, and when you can just put your first name on a sign, you have big time name recognition.

Where is Bass on my list you might ask? I wanted the hook in the water but was out numbered, so we went with the red white and blue thing. They are nice, but where's the Hooked on Bass theme?
Posted by samoasoftball at 10/27/2010 16 comments:

The tide in Humboldt Bay ebbs and flows. Last Monday, when the tide went out, the Samoa pulp mill was open for business. By the time the tide returned, the pulp mill closed for good.

More than 200 of the highest paying jobs in the county are permanently gone. News of the closure heightened concerns over the economic stability of the port and the surrounding community.

The pulp mill began operations in 1964. Since then, six different groups have owned the mill – an indication of how difficult it is to conduct a profitable pulp mill enterprise here on the North Coast.

In a pulp mill, workers manicure wood chips – a waste product of the timber industry – through a long process into pulp, which has the consistency of hot oatmeal. Workers spread the pulp onto 100-foot screens, which then travels on a conveyor belt where it is vacuumed, pressed, chemically treated, and dried into paper. Then they collect the paper into 550-pound, ready-to-ship bales.
Evergreen Pulp Inc., a subsidiary of a Chinese paper manufacturing firm, closed the mill in October 2008, but workers and community members clung to the hope that it would reopen. The mill has been out of commission since. The announcement last Tuesday that the pulp mill will close permanently meant workers let go of all hope, forever.

It was during Evergreen's ownership that some community members began to loathe the pulp mill. Evergreen Pulp racked up over 200 violations. Carol Binder spearheaded the "People Against the Samoa Pulp Mill" blog, a coalition of residents from West Eureka.

Richard Marks, the 4th District Harbor Commissioner, worked at the pulp mill since 1980. Marks understands Binder's point of view. As an employee, Evergreen's environmental stewardship disappointed him. "Our community was basically environmentally raped by Evergreen pulp."

Problems with environmental stewardship go back before Evergreen. During previous owner Stockton Pacific's ownership, agents raided the mill because of BOD violations. The Water Board filed a suit for $700,000.
When the pulp mill was in operation, the plume from the stack invariably blew to western Eureka. Back in the 1960s, ‘70s, and ‘80s when sulfur dioxide was prevalent in the plume, the whole area smelled of rotten eggs.

After four years of ownership, Evergreen shut down the plant and "skipped" town, says Marks. A legal battle still looms between the workers and Evergreen. Marks says that Evergreen violated the Worker Adjustment and Retraining Notification (WARN) Act and left hundreds of thousands of dollars in employee medical bills unpaid.

Freshwater Tissue Co. bought the mill for $2.8 million in February 2009 with plans to reopen the mill and rehire the previous workforce – mainly those affiliated with the Association of Western Pulp and Paper Workers (AWPPW) union. Union workers had newfound hope that they would return to work, and 80 percent of them committed to returning.

With no offers, Simpson scaled down the business plan. Freshwater's revised plan was to make eco-friendly pulp and sought $30 million in financing. Freshwater got a 10-year contract for all its production. Still, no one was willing to loan the funds.

"I am disappointed in our failure to restart the pulp mill," says Simpson in a press release. "We exhausted all possible means of funding the project. Unfortunately, [Federal Deposit Insurance Corporation] regulations made it impossible for banks to finance startup projects like ours."

David Hull, chief executive officer of the Humboldt Bay Harbor, looks at the harbor as the economic engine to the area. "The pulp mill closing was a big hit for the whole region," says Hull.
Hull estimates the pulp mill brought 24 ships – 700-feet long and 40,000 to 50,000 tons in weight – every year into the bay. Humboldt Bay Harbor collects between $12,000 and $17,000 per pulp mill ship.

With that much money to gain in ship traffic, the Humboldt Bay Harbor -- a governmental entity --worked with pulp mill owner Bob Simpson and lobbyists in Washington D.C. to revitalize the dormant mill.

The Samoa pulp mill contributed 15 percent of the district's water revenue. Steve Fleisher, former CEO of the mill under Stockon Pacific Enterprises, says, "When they closed and stopped buying water, their portion of the bill basically had to be picked up by the remaining customers. The customers are the cities and services districts who ultimately pass on the costs to their customers. So, our water bills have all gone up."

Humboldt County Economic Development Coordinator Jaqueline Debets says the economic mentality of Humboldt Bay needs to shift. "It's not so much a port. It's a bay, and it's transitioning because we're changing how we import and export."

Debets feels the lack of transportation arteries in the Humboldt region makes Humboldt Bay unappealing for ships to import. "Once you do get to the land, you're still not close to the market."
Debets predicts Humboldt Bay will do more aquaculture – the farming of fish, crustaceans, and mollusks.

Kurt Hippen was one of 200 employees laid off when Evergreen Pulp shut down two years ago. Hippen put in almost 30 years at the mill, mostly as a carpenter. Now, he has no health insurance. Hippen drove to a health fair last weekend where he could get his blood tested for free.

Hippen enrolled in several classes since being laid off in an effort to gain new job skills and find employment. He is in a water operations course at College of the Redwoods with 20 of his former pulp mill coworkers. Many more wait in line to take the course. Humboldt County's Health and Human Services Employment Training Division offers the classes free to former pulp mill workers.
Since the mill shut down, Hippen became certified as an energy auditor. He also earned solar power, historical building restoration, and electrical wiring credentials. Still, Hippen ca not find permanent employment. "It angered me," says Hippen after receiving an email from the vice president of his union telling him the pulp mill is permanently shut down. "What angers me the most is the fact that 215 people aren't going to have good jobs."

The history of the Samoa Pulp Mill is a microcosm of the decline of California's manufacturing industry. Gino DiCaro, spokesman for California Manufacturers and Technology Association, says that in the past decade, California lost 34 percent of its state industrial base. Businesses move offshore where wage rates, energy costs, taxes, and governmental regulations are more suitable for profit. "California is a very costly place to do business," says DiCaro.

The pulp mill starts to look like an old Chevy that's seen better days. Simpson wishes to recoup his investment by selling parts from the plant. Freshwater has an offer for its power and recovery boiler. Hippen expects Freshwater to sell the turbine, pumps, and tools. Freshwater's plans for the 156-acre site are unknown.

Marks reminisces about the way things used to be in Samoa. His adult sons moved to Sacramento and San Francisco for work. "I wish there was something here for them."
Posted by samoasoftball at 10/10/2010 10 comments:

What the freak was that! (A Fisher actually) 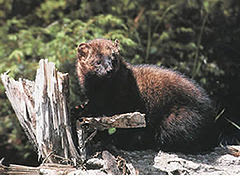 Robin and I were driving down Lord Ellis the other day and I had to slow down to avoid running over a strange animal. This animal was nearly 6' long from tail to snout and nearly took a whole lane and looked like either a mink or a ferret. We both discussed what this could be and neither had seen this animal in the wild. I brought this up to a person well versed in animals in the North Coast wild and he congratulated me on witnessing a "Fisher". A very rare sighting he said in Humboldt County. It seems just a few years back that I had seen very few possum and now they are all over the place. Any others out there seen these "Fishers?"
Posted by samoasoftball at 10/03/2010 5 comments:

The Niners have to win today to avoid an 0-4 start. Not good. Coach Mike Singletary is having a melt down of extreme sorts, and none of the offensive coordinators seem to know how to get the ball to Vernon Davis! The defense has been on the field too much. Sigh. Another long winter.

The Giants have picked a bad time to lose games. If they do not win today against the Padres, they face either having to play San Diego at Petco, or go to Atlanta to play the Braves. Let us hope it doesn't come to that!