Humboldt Domestic Violence Services (HDVS) hosts fundraiser next to Eureka Natural Food! This weekend from 10am to 4pm!

I realize the silence when I write about Humboldt Domestic Violence. It is a uncomfortable subject, yet nearly everyone has some sort of this violence in their family. Anyways, the HDVS is hosting a fund raising event at the old Dollar Tree next to Eureka Natural Food on Broadway. Items that were left behind by the past Dollar Tree owner will go at way low prices. My sister Mary and I stocked the hardware, gardening, BBQ, ceramic, baby, shoe sundries, eye glass, home repair and improvement, automotive, toy, young girl and education department and this is a great chance for you and your family to take advantage and help stop domestic violence. The doors will be open from 10am to 4pm both Saturday Feb. 27th and Sunday Feb. 28th.

There are many holiday theme items that can be had at next to nothing prices. Please come out and help for this worthy cause.
Posted by samoasoftball at 2/25/2010 No comments: 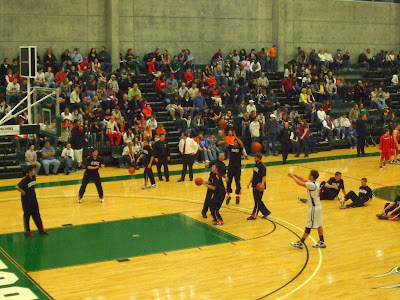 The Arcata High Boys and the McKinleyville High Girls both won their respective tournament titles for the second straight year. One observation about the Panther girls team win over Eureka High. Senior Sage Romberg is the best girl basketball player I have ever seen in Humboldt County. She has weirdly keen court sense. She sees the the whole court, and is able lead players to open spots. You just can't teach what she does. And you Trina McCartney fans please refer to each players whole game. Sage can pass, rebound, shoot....she has no weakness in her game. And the other Panthers? They will win it again next year. Their bench just played solid. Lots of upside for the next few years.

On to the boys game. Ferndale was playing in their first Niclai final and seemed to have the jitters playing before a huge crowd against a huge team. They only scored 2 points in the 1st quarter. But they came back from an over 20 point deficit to challenge Arcata in the 4th quarter. Tiger player Jordan Semple is my choice for MVP this year. He makes all of his teammates better. If some D1 school passes up on this 6'6" "2" guard, shame on them. But if he does play JC ball, please let it be CR and maybe a reunion with Tim Couch and Ryan Dehart and then move on to HSU. (This is the selfish fan in me.)

The Niclai Invitational. Dick, you would be proud of the event. Great competition, great crowds and good times. See ya next year.
Posted by samoasoftball at 2/19/2010 1 comment:

George V McGraw "Uncle" George was born March 27th 1952 in Lemon Grove, San Diego and died suddenly at his home with his wife by his side February 7th 2010. Uncle is survived by his wife Monica and his two best friends and co-conspirators Martha and Margaret. Uncle was everything to George & Francine, Matthew and Lauren. Not a Christmas passed without his stocking hand outs and absurd gift giving. George had three families, the Barattis, Sears and the Babe's softball team, or as I called it, the cult. George moved to Humboldt County from San Diego in 1973 to work with the Humboldt State Baseball program. George started working at Sears where he met many customers and co-workers. So many have called to express their sadness at his passing. George touched so many lives in such a positive way. In 1982 George married Monica Baratti in their backyward. They were married July 16th 1983 because that was the only weekend that didn't have a softball tournament. They were married by the Haps Dogs manager, Lou. George's other family was his softball team's New York life, Loleta meat market, Mad Max, Hapsdogs and "Babes". George was so happy playing ball especially those tournaments in Chico and Redding. George leaves behind a broken hearted wife and a large extended family; Martha & Dave, Margaret & Bill, George, Franny, Matt, Lauren, John & Bonnie, Erin, Caroline, Stephanie, Hillary, Joe, Johnny, Father in law John Baratti and last but not least his best friend of 40 years Dave Frazer whom he considered his brother. In lieu of flowers please make a contribution to your local Little League Team.
Posted by samoasoftball at 2/11/2010 No comments: