Ferndale native Hailey Dolcini throws back to back no hitters in Division 1 play! 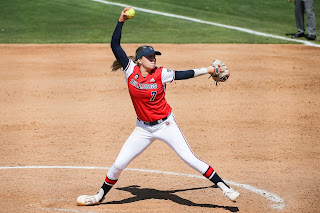 I seen Hailey play when she was at Fortuna and thought she had an unbelievable bat. Yes, she was also un-hit able throwing, but I felt her bat separated her from most. Man, has she come a long way. She threw a no hitter striking out 18 batters and followed that up with a perfect game! She is 11-3 on the season with a ERA of 0.95 which is 17th in the nation. She is second in the nation in shutouts with 8 and 9th in the nation in strikeouts with 151. And this is Division 1 ball with the Fresno State Bulldogs! The big show! And a scholar athlete to boot!
Posted by samoasoftball at 4/06/2021 1 comment: