Remembering my older brother Roy Marks this Memorial Day. The picture is my brother and my nephew Jamie Marks. “Bigs” was small in stature but huge in heart. Red hair and chip on shoulder. He died of complications from “Agent Orange” poisoning from Nam. 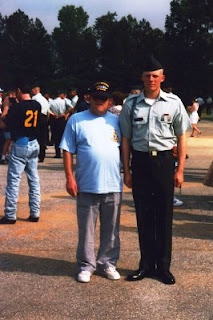 Roy was in the Army and a 1st Air Calvary Division soldier. survived 1 term of service in and 2 terms in and received a Bronze Medal, Air Medal and Army Commendation Medal for 25 missions over hostile territory.
Posted by samoasoftball at 5/28/2012 2 comments:

I wrote my comments on Arcata High Basketball coach Bob Wallace back in November. I am really surprised that Time Standard sports writer Ray Aspuria had no clue that Bob was under fire. Bob is a great guy, but just seems to be a lightening rod when it come to public school issues. And there has been an ongoing group of parents dressed in orange attending Northern Humboldt Union High School District meetings to complain about Mr. Wallace and his coaching style. So Ray should have not been surprised, but should have been on this months ago! Ray asks, "Why hasn't the decision been made more public and media notified?" That is your job Ray! KIEM has been on top of this for quite some time.

I do hope that Ray does a follow up on this story. If the decision was made in close session, we may never know the reason Bob was let go. But I do know that 3 of the board members of the NHUHSD are coaches themselves. (Dan Collen, Mike Pigg and Dan Johnson have many years between them.) So please Ray, write a real investigative piece, not some commentary with no meat.

Allow me to introduce myself. I’m the best friging softball player you’ve ever met.

I just spent three hours in the batting cage and hit the @#%$ out of the ball. Line drives, big flies, opposite field shots. I can do it all. Some kids next to me in the cages were staring and pointing at me. I can’t blame them. They’ve probably never seen a 55 year-old man wearing Oakley Blades and batting gloves who can hit bombs like me. Especially not with shorts this tight.

This season, I’m making sure we sweep all 3 leagues. Especially the Men’s League at . We were two outs away from winning that baby last year and now I can taste it. I’ve gotta get my hands on that 10-foot plastic trophy. It’s all I think about. Rumor has it the league winners get 2 free pitchers at Babe’s  Pizza after the season. No way we lose with the trophy and 78 ounces of Bud on the line.

I just bought all new equipment for this season. You should see the extra long stripped baggy baseball pants I got. Super tight. I picked up a new set of wristbands, a tube of eye black and a pair of 3-inch mud cleats, you know, just in case I need to break up a double play. I also got to get my hands on one of those $350 Miken Ultra II bat for a little extra power. It may cost me a week’s pay, but screw it, when I start cranking 250-foot shots it will be worth it.

I can’t wait for that first at bat. I’m bringing a tape deck to the game, so that I can blast The Scorpions when I walk to the plate. Nothing gets me fired up to play ball more than The Scorpions. Except maybe Metallica, but I save that for the playoffs.

They should have known better than to get into a league with me.

This year I’m focused. I practiced like a son of a bitch in the winter at Coopers Gulch and got the call to play catcher. That’s right, the main show baby. Only the best play behind the plate. I have to be sharp, so no more beer during the games. I’m going to wait until after the game to starting pounding cold ones and I’m still going to drink you under the table.

My initials might as well be M-V-P. That stands for Most Valuable Player for all you non-softball players. The League starts in a few months. I may take the week before off to prepare. 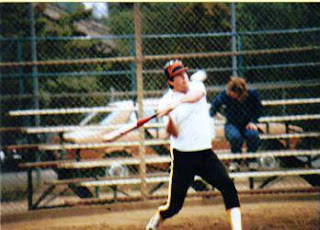 (Disclaimer: I plagiarized some of this material. It reminded me of some people I know.)
I have had many comments on the fields about this on my facebook, so I thought I would go blog with it.
Posted by samoasoftball at 5/23/2012 2 comments:

Don't tell me you don't notice the pattern. Wendy's gone. Jack in the Box gone. Artic Circle gone. Not to mention Quizinos, Arby's, KFC, Little Caesar's, Hometown Buffet and Round Table! Hundreds of jobs gone! Just because of a bunch of Garlic Fries and people buying Local!
Posted by samoasoftball at 5/21/2012 10 comments: 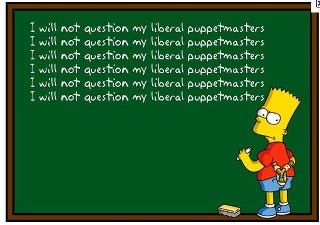 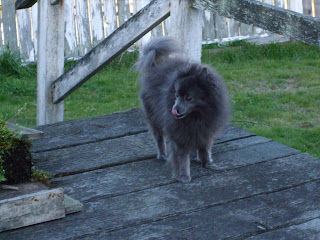 Dammit! It is weird that I knew he would die today. I could just sense it. In the middle of the night he died in Robins arms at about 3am. Robin decided we needed a runt of a Pomeranian puppy that we named Smokey 13 years ago.  He hated people, (Except his pack family) and really hated cats. He was actually chasing them off his porch the day he died. He was around 15 pounds and loved food until the day before passing.  Robin is holding him in her arms as I write. I offered to bury him now but she doesn't want to let go yet.
Posted by samoasoftball at 5/12/2012 7 comments: 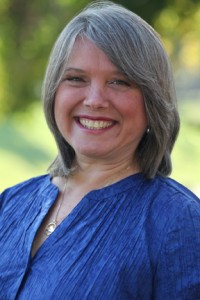 I really feel Susan Adams will do a great job in Congress. I love everything about her. But I do think there are other candidates in the race that are qualified. My main interest is supporting this candidate is she might be the ONLY one able to challenge Jared Huffman in the General election. (Jared once more blew off a debate in Humboldt County. Have you got the hint yet Humboldt? He doesn't care about you!) Susan has no real negatives for the Huffman machine to attack! I do like Norman Solomon and if he is in the top two I do what I can to help in the primaries. But really think Huffman will go negative about his arrest record. (Even if they are from peaceful demonstration.) And Stacey Lawson is really easy to talk to and intelligent, but Huffman has already exposed many weaknesses and has hurled her past as a negative. And Andy Caffrey just doesn't have the funds, but the debates would be boring and shallow without his insight. Those are my favorites, but I will cast my vote for Susan.
Posted by samoasoftball at 5/09/2012 13 comments:

A lesson in Ballot placement for 2012 Primary election. 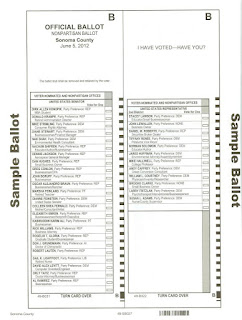 I had a quandary about ballot placements and asked people I thought would be in the know without great success. Each election a randomized alphabet drawing is done by the Secretary of State. (Check out the link to see the actual draw.) I assumed this applied for all elections in the state. But now I find out there is a variation. Congressional candidate Andy Caffrey posted on his facebook page the Sonoma County Sample Ballot, and the order was messed up according to the draw. I called the Secretary of State office and they explained that each county starts at a random number point and THEN follows the alphabet pattern. So where as Susan Adams should have had the top ballot placement since "A" was the third draw, Sonoma started at number 13, which happened to be "L" so Stacey Lawson is first on the ballot and John Lewallen. I don't understand why Lewallen is second since the second letter of his name on the draw comes up before the "A"  that Lawson represents.

I called the Humboldt County elections to ask what number we were starting from in Humboldt County and was told they were just going with the drawing set by the State. Huh? So what is the right answer? Obviously I have physical evidence that the different counties use the a different criteria of the random draw, and that was verified by the Secretary of State's office. But Humboldt does something different?

I know this is trivial, but when the 1st person on the ballot could get a 5% boost just on the count of luck of the draw, it is relevant.
Posted by samoasoftball at 5/07/2012 4 comments: