Marks for Commish meet and greet.

The Richard Marks for Harbor Commissioner 2009 campaign is hosting a candidate "Meet and Greet" tomorrow at the Labor Temple (840 E Street in Eureka)at 5:30pm. There will be snack type foods and beverages. Stop by and say hi!
Posted by samoasoftball at 9/29/2009 1 comment:

The best of the late model stock car drivers converged at "Fall Spectacular" race at Redwood Acres Saturday night to battle in an epic 100 lap race. Big crowd. And what a race it turned out to be! Locals Jimmy Walker, Jerry Peterson and Joe McDonald Jr. had their hands full against a large out of town field. Noel McCormack of Lakeport shared some paint with Joe McDonald Jr. and both were nearly fender to fender for over 90 laps! I video taped a little bit of the action so you can hear and feel the atmosphere. Lenz ended up winning the hard fought contest with local driver Joe McDonald Jr. in second. Joe had "Marks for Harbor Commissioner" painted on his hood and raced a fantastic try. I just wish Rollin Trehearne was there to call the race play by play. I have been fan at the Acres since the 60's.

Richard and Robin ride the Speeder! 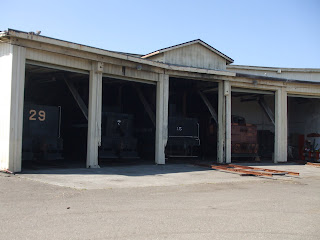 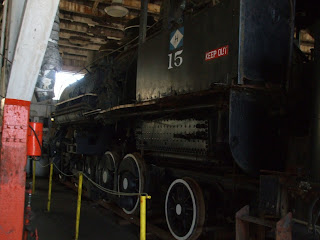 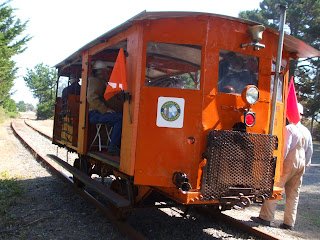 Robin and I finally made some time to ride the Speeder. Well worth the $4 a piece fare! We have both hiked and biked beside the rail line since the early 80's and it was good to get this new perspective. The crew was very informative and you could see the excitement in the riders. I was surprised on how many people were taking pictures and the positive automobile response for the Speeder going down Highway 255.

The Timber Heritage Association has dedicated thousands of hours of volunteer work to make this project and other preservation projects related to rail history prevalent.

This project is also an affirmation of the relevancy of an excursion train to Scotia.

The Round House is one of only 2 left in the US! It holds great historical value.

Humboldt County Democrats of the Year 2009.

Dr. Ann Lindsay and Dr. Alan Glaseroff were the honored Humboldt Democrats of the Year. Two very highly respected members of the community. They received many proclamations from all legislative branches and it was a moving sight.

This years "DOTY" was well attended and ran smoothly. I just can't say enough good things about this event this year. The HCDCC Ways and Means Chair Charlene Cutler-Ploss and other committee event organizers deserve much Kudos for once again putting on this quality get together.
Posted by samoasoftball at 9/25/2009 2 comments:

Take what you will from this allegory. 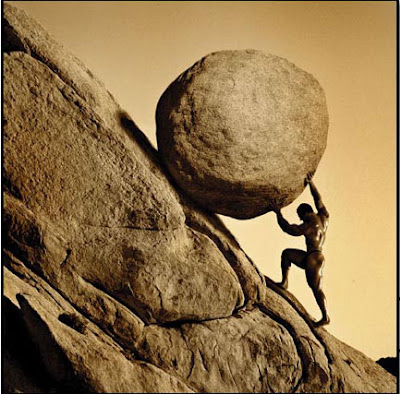 Fall Softball being played in Arcata!

We started up the fall wood bat softball league in Arcata this week. I proposed this league and was given the OK by the Mad River Softball Association Board of Directors and there has already been some great games! Games are played Mondays through Thursdays from 6:20pm to 8:40pm. Come on out if you are bored and check out!

I am still organizing the Basketball League in Arcata. Should start in early October. Give a call if you are interested.
Posted by samoasoftball at 9/23/2009 No comments:

Sign etiquette 101. When do you start with the yard signs?

I have been pushed by people on my campaign to put out signs now! I realize that one of my opponents for the 4th Division Harbor District has been putting out signs in their neighborhood, but it is too early by proper protocol.

I have told supporters that the proper timing etiquette is 5 weeks from the election. My target date is coming soon. I have had the signs for a few weeks. If you have a place available in the Eureka/Myrtletown/Samoa/Fairhaven area, please call me at 445-3432.
Posted by samoasoftball at 9/20/2009 27 comments:

I was able to garner some sign placements through my Facebook page, so I thought I would try shamelessly using my Samoasoftball blog for the same purpose. If you have a highly visible spot in Eureka or Myrtletown, just call me at 445-3432 and leave a message if I am not there.

We have been phonebanking, and while I realize it is not everyones cup of tea, if you would like to get involved in a campaign here is your chance. e-mail me at Samoafog@aol.com. We had a good showing last night, but I can't expect that kind of turnout every night. People get burned out if called upon too often.
Posted by samoasoftball at 9/18/2009 6 comments:

I sure hope Susan or John don't end up knocking on this angry dudes door in Eureka. I was banging on doors yesterday and this guy just yelled obscenities and was just not friendly. I wonder what causes such anger in some people. 95% of the people who answer their doors are polite, but those 5% can really make you question humanity.
Posted by samoasoftball at 9/17/2009 15 comments: 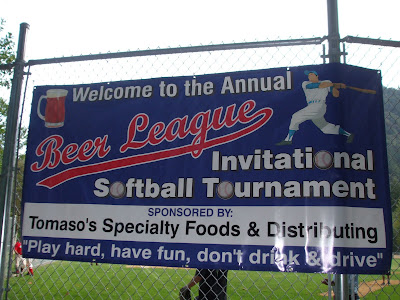 The Grand Puba Boy's softball team were the only undefeated team going into the Championship game of the Tomaso's sponsored Wood Bat Beer League Championships in Willow Creek this weekend. Blue Planet Pet shop were the challenging team in the Championship game with a 4-1 record. The score was tied 1-1 in the 5th inning when a torrential downpour sent everyone scrambling to their rigs to get out of town. And one quick player for the Puba's team took the trophy and ran! So, by imminent domain, the Puba's hold onto the coveted trophy. (Last years champs have to hand make, art wise, their predecessor trophy. The Hey Juan Barnstormers were last years champs and had the trophy on display.) I get a feeling the Puba team will not give it up quietly. Tomaso's and the Green Sox ended up tied for 3rd with the Barnstormers and Breakers tied for 5th in the 10 team tournament.

The Samoa Athletic Club organized this event for Tomaso's and the theme was "Don't drink and drive!" Most of the players stayed at Camp Kimtu or close by. Tomaso's supplied water and salsa on ice in each dugout and Bien Padre donated chips. There were hundreds of people at the park over the weekend. 98% of the 120 participants had a great time. I would say that was pretty good.
Posted by samoasoftball at 9/13/2009 6 comments:

The Humboldt County Democratic Central Committee voted to endorse me for my bid for Harbor Commissioner for the 4th Division. Mike Wilson was endorsed by the committee for his re-election bid for the 3rd Division. All Candidates were present at the meeting and spoke and answered questions. The meeting had an overflow crowd.
Posted by samoasoftball at 9/10/2009 9 comments: 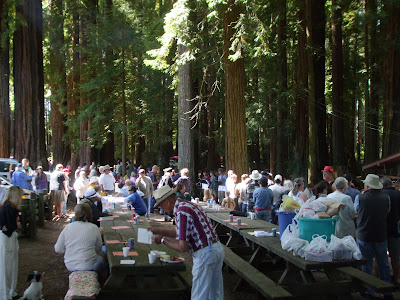 Jimmy Smith announced the endorsement at the Central Labor Council sponsored Labor Day Picnic. There was a great crowd out there at Sequoia Park. 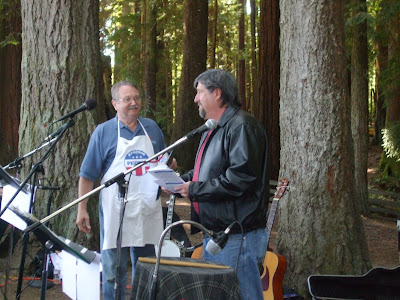 I walked the streets today and ran across some material for one of my opponents. Looks like they have some high dollars to run a campaign. Should be interesting. I know quite a few working class people in the area.
Posted by samoasoftball at 9/08/2009 2 comments:

Last night at Art's Alive was crazy with people. I hand billed my literature for Harbor Commissioner and was able to get sign placements and support from the hundreds I encountered. Lot's of people from out of town wandering also. Probably from the Blues by the Bay.

I heard some rumors about the Pulp Mill starting in the near future. I went out to the office and rung the bell at the desk, but no one came down, so I have nothing but rumor to report.

Mad River softball is winding down their playoffs. Pretty smooth season with some great competitive ball. Fall softball starts in a few weeks! Oh, and Basketball in October.
Posted by samoasoftball at 9/06/2009 12 comments:

I happen chanced on a Humboldt Fisherman’s Marketing Association meeting to hear their views on the “Marine Life Protection Act (MLPA).” Fishermen at the meeting were handing out shirts that said “Much Less Public Access” with a picture of Arnold Schwarzenegger holding a fisherman upside down on the back. The Act will create Marine Protected Areas (MPA) on coastal areas that will be designated after “scientific” studies “to increase the coherence and effectiveness in protecting the state's marine life and habitats, marine ecosystems, and marine natural heritage.”

In a nutshell, MPA’s will be created in places that could curtail fishing or kelp harvesting in certain coastline areas. The big contention by the locals is the lack of true scientific data to determine where this might happen. Fishermen are being solicited to “cut their own noses off in spite of their faces” by helping in the process of designated potential places they will not be able to fish. One commercial fisherman said he had provided fishing data to be added to a database and when he checked it out later, they had no history of fish being caught in the area he had been working for 20 years! Local fishermen are also worried they will be out lobbied by Southern California populace interests in trying to protect their own fish baskets. Fishermen could take a 20% hit according to "Ecotrust" an organization collecting data.

One hope for the local Fishermen would be if the Initiative staff would push forward a “single plan” or a “unified” directive with all stakeholders involved, Fishermen, Environmentalists, Department of Fish and Games, California Department of Parks and Recreation, Fisheries, Native Americans and all other related interests.
Posted by samoasoftball at 9/01/2009 4 comments: