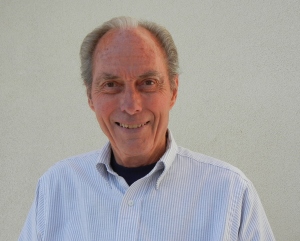 David was one of a kind. Opinionated, vocal and confident in his ideals. I first ran across David and his wife Penny at Citizens Port Development meetings in the 90's while I worked for Louisiana Pacific. They were a great tag team when it comes to politics. Robin and I saw and visited David and Penny at stock car races, and they both had articles reporting the races locally. David once wrote a letter to the editor challenging people to run for office and it was that little push that had me sign up years back. And while he did not necessarily agree with my politics, he wrote me a check to start me on my way.

Some people just gripe and complain and do nothing to try to solve issues. This was not David. He was feet first in controversy. He will be sorely missed in this community. Best Cover Songs of all time. At least by Samoasoftball standards.

10. I need love by Luka Bloom. Original by LL Cool J.
9. Ryan Adams doing Wasted Dreams by Iron Maiden.
8. My world is empty without you. By the Afghan Whigs. Original The Supremes.
7. Gary Jules rendition of Mad World. Tears for Fears cover.
6. Hazy Shade of Winter by the Bangles. Simon and Garfunkel tune.
5. America by YES. Two Simon and Garfunkels in a row.
4. Wish you were here. By Widespread Panic. Gutsy to take on Pink Floyd classic.
3. Johnny Cash does Trent Reznor song Hurt. And Johnny wears this song.
2. Baker Street done by the Foo Fighters. Gerry Rafferty did the original but I like the hard take that the Fighters bring.
1. To sir with love by Michael Stipe and Natalie Merchant. From the movie with the same name. Done at a Bill Clinton inaugural ball.
Posted by samoasoftball at 6/25/2012 5 comments:

Robin's grandfather Eddie Carroll grew up on the Cherokee Indian reservation in Oklahoma and moved out west to Humboldt and raised a family. He became a union boss  for the Redwood District Council (RDC) in 1960 and stressed organizing. He grew the RDC to 4,100 workers in 1961! I doubt there are that many forest industry jobs total now. Lots of union history here in Humboldt County. I thank God I have been able to be a union member. Especially next month as a I start to collect on my union pensions!
Posted by samoasoftball at 6/25/2012 No comments:

Samoa and Fairfield (Fairhaven) to annex with Manila?

To annex or not to annex, that is going to be the question tonight at the Manila Community Center at 6:30pm. The Times Standard screwed up by naming Fairhaven Fairfield, not once, but twice. Danco needs to have Manila take over the infrastructure of Samoa for their proposed project to move forward. Fairhaven participating will be a long shot as far as I have observed while a Director on the Samoa Peninsula Fire District. But there could be a mutual agreement of Fairhaven and Samoa residents creating their own Community Service District. I guess I will find out more tonight and if it is interesting, report tomorrow of the talks.

Update: The Manila Community Service District voted 5-0 to move forward with more feasibility studies on potential annexation as long as there is no costs created by the process. Samoa Pacific will have to fund all studies. 3rd District Supervisor Mark Lovelace was present with addional information from LAFCO. (Is Lovelace at every meeting everywhere? Seems like it. Hats off to him. You would think he would be taking a well deserved break!)
Posted by samoasoftball at 6/21/2012 No comments:

Just who are the big "developers" everyone cries about? 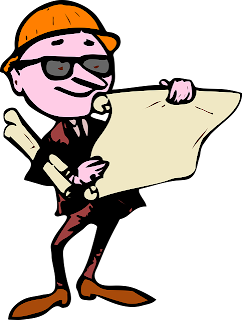 Every election cycle the press refers to monies from local "developers" influencing local elections. The same thing on the blogs. But no one is defined as that developer. So under the cloak of anonymity or publicly, would you all please let me know who these evil companies might be? I don't see that much development going on. Will that all change now?
Posted by samoasoftball at 6/18/2012 21 comments:

My dad was a mystery to me. He took me to my first Giants game, but that was pretty much the highlight. Never played catch with me, or had a fatherly talk or anything like that. He fathered 8 kids so there was not a lot of him to go around I guess. He was a major in the army and then he became a lawyer. Quite the character, he loved playing pool, bowling and drinking.  During his career, he had a few death threats.  The article below was a story of an assassination attempt on him. I guess it wouldn’t be the last. 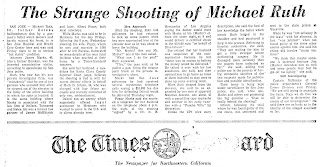 That Humboldt County Democratic Central Committee endorsement just became that much more important. After stirring speeches by Josh Drayton and Heidi Benzonelli about the need of democrats supporting democrats and counter arguments of  past hypocrisy of the HCDCC leaders endorsing other party candidates in other campaigns, the HCDCC overwhelmingly passed a resolution requiring members to sign a statement to not advocate that voters should vote for someone other than the HCDCC endorsed candidate.

What does this mean? If you are non Democrat running for office and want an endorsement of a HCDCC member, probably ain't going to happen.
Posted by samoasoftball at 6/14/2012 16 comments: Never been a huge fan of WalMart and their relationship with employees. I mentioned to Robin about maybe picketing the opening on the Bayshore Mall and my wife of over 30 years said, "I will rip that sign out of your hands and whack you upside the head with it and stomp on your body on my way in!" I guess I will stay home instead.
Posted by samoasoftball at 6/13/2012 2 comments: 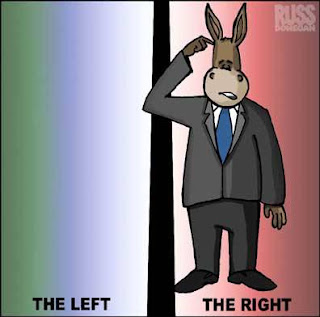 The San Francisco Democratic County Central Committee had 51 people run for 24 seats and they spent over $500,000 in the race with Scott Wiener spending $70,000 himself. And 6 of the winners are on the SF Board of Supervisors! That means that if any county issues come before the central committee they will have to post a notice of a meeting of the BOS! That is some serious Democratic politicking.

So in my estimation, there are 14 Moderates and 8 Progressives on the current committee. It will be interesting on who the next Executive Board might be. It has been ruled by Progressives for years.

Should be an interesting meeting this Wednesday at 7pm. Bring the popcorn and maybe watch sparks and accusations fly! Hope the media is out to witness this. 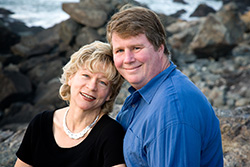 Have you ever seen them both in the same room? Me either! Don't know why I didn't figure it out before! Now we know where Patrick got the big bucks! 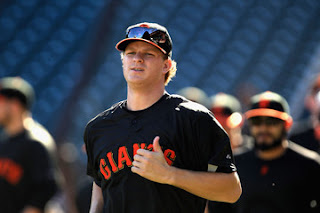 Clif Clendenen and Norman Solomon look to still have a chance with over 6,000 votes pending in Humboldt County. But has anyone came back after a final report? Yes actually. Bob Service was trailing Jake Pickering 560 to 556 for the 4th District Democratic Central Committee race in 2008 and ended up winning 786 to 773! So it has been done in the past. Not likely to change though.
Posted by samoasoftball at 6/08/2012 4 comments: 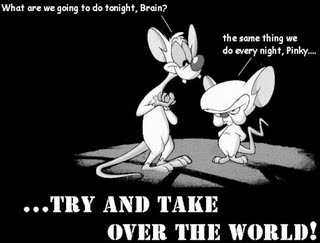 Actually, take over the Humboldt County Democratic Central Committee was the goal. I came up short in the ballot box by 60 votes. I had not made it a secret that I was hoping for political reform on this committee. I do not like all the processes so I was trying to make change from the inside. But this is a public process and I respect the voice of the people. Congrats to Bob and Pam Service, Linda Atkins and Virginia Bass in the 4th District.

I will continue on as a Associate Member and do the Worker Bee type stuff. There are many great people on the committee and I hope we can put this all behind us.
Posted by samoasoftball at 6/06/2012 5 comments: 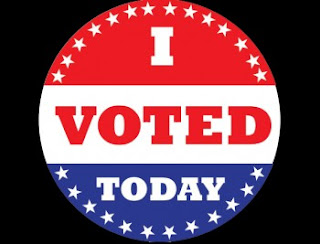 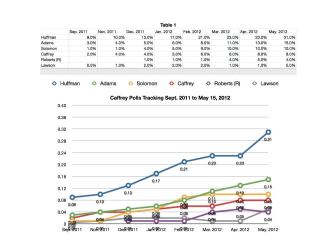 Andy Caffrey supplies this latest poll showing Huffman as a runaway victor in this primary race with Susan Adams holding strong to second. Solomon just never seemed to gain traction it look like. Here are some outside looking in observations from the Samoasotball peanut Gallery:

Jared Huffman: Front runner from the start. Nice TV commercials and great mailers. Lots of high ranking endorsements. This guy will be tough to beat after June.

Susan Adams: Nice mailers, but I have not heard one radio ad or saw even one TV ad. And her campaign looks to be dead broke. But is she survives this primary, I will maybe double down my last donation.

Norman Solomon: Why, oh why did he have to negative on Stacey Lawson? His mailers about himself were really good and positive, but the negative mailers were just over the top. I am sure there are many out there who will not support Norman just for this. I have not seen one TV ad or heard one radio ad.

Stacey Lawson: All that money and you couldn't afford more than one TV production? I don't watch that much TV but this commercial is on all the time and is grievous to watch. Her radio ads are pretty much a mirror of the TV. This campaign has been nothing but damage control. Too bad. She is very intelligent and likable. Just needs to start smaller, but she wouldn't be a multi-millionaire with that thinking.

Andy Caffrey: The front runners ultimate campaign on a shoe string budget. Andy has gotten the biggest bang for the buck for sure! Jay Leno, MSNBC, Newspapers all over the North Coast and the best watch in all debates! But no TV or Radio that I have seen outside his facebook. And no mailers.

Dan Roberts: Nice TV commercials. His campaign needs only to identify himself as the true conservative Republican in the race. If he has a slick mailer going to Republicans and gets them to vote, he could be a dark horse.

The others: Good people with no chance. But they have had an exciting ride and maybe will focus on lower offices in there communities. Tiffany Renee excluded as she is in public office currently.