This picture is from last August 2nd at the first Scotia Tournament in years. My team placed second and had a great time. The teams were young out there! Right now I am still on the injured reserve list. Dr. Lyell has not cut me open yet to repair the torn cartilage in my wrist. 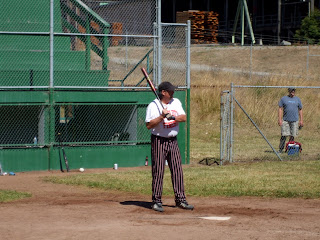 He let me know that I am looking at a 3 month recovery time after the surgery. I certainly don't want to miss out on league!

It has been a really frustrating injury as I can not swing a bat or golf club. And yet I have all this time off. I have been going to the gym and doing what weights I can without turning my wrist. I have been trying to play Basketball, but not having the wrist to push off with leaves me with just a left handed game. Not pretty.

Here are some of the players who will be on my Senior League Team this year. Last years returnees: Dudley Walters, Steve Ritter, Dave Damme, Pat Moore, Tony Hernandez, Bill Landowski, Walt Vance, Chris Beechel, Mike Newman and John Parker. (JP was on the DL last year.) I am hoping to add the following: Chuck Kirsher, Carlos Avelar (Both played year before), Ronnie Webb, Jamie Robertson, Ron denHeyer, Ed Fregoso and John Egerer. That is a pretty good lineup of players.

But first up in April is the Blue Lake Wood Bat League, where I will hopefully play for Tomaso's again. Then For Tomaso's in in the Arcata League and R-Co in the Eureka Metal Bat League. My SAC team will do tournaments, in the valley, metal bat and fast pitch.

In the near future, I will be trying to organize a hard ball league and will have a calling out for adult players in the next month or so.
Posted by samoasoftball at 1/26/2009

I have a husband who needs to play ball! Please let us know when you've got a team in the works!

Take care of your wrist and health, Richard! All the best to you and Robin!

I didnt know Eddie was that old. He was in school with me and I am 47. And I will join ya when I am 50 If ya want Rich. I plan to retire at that age and move home.

Rambo: Getting pretty close! They allow a few players over 45 for tournaments with the 50's. May have to catch on with us in Medford this year!

Richard, you are not on some sort of quest for long term disability for your athletic injury or is that the pulp mills fault you have a sore wrist.

6:06pm-Sore wrist? It has been messed up for almost 6 months! I torn some cartilage in my wrist at work back in August and have not been able turn my wrist because of the injury.

The mill was running at the time. It closed in late October and I was already on disability.

The pace that a disability claim goes on is out of my control and is the hands of my adjuster.

I usually play softball year round. I have been fortunate to have played this long pretty much in good health.

Tell me when Rich and I will be there with my Glove and cleats on. Long as you can use another lefty batter. You know Mark Bateson and Jimmy Sloss are right about there in years too. Think Bateson my be 44 or 45. Mark Snelgrove and Truck would be good additions when you need a extra player in the 45 range too. To Bad my Brother Chris Evenson is only just getting to 40, I know you played against him when he played for that flooring team. He has a good bat and good glove/arm in the outfield

When could you ever swing a golf club?

Rambo: Mark Bateson played for me just 2 years ago. Same with Truck. I work with Sloss at the Pulp Mill when it runs, but he has no interest in playing. Chris is still one of the better ball players around with the Wise Flooring gang.

8:29am-Never very well I admit. Brutal may best explain it. I have plenty of time off now and could work on my game, but I can't swing a club!

Rich, talking Jr or Sr Sloss? I meant Jr., Still a great glove even after losing his fingers and have a toe attached to his hand. I was one of his room mates after it all happened and he played a couple tournaments with us. Lost contact with him after I moved and wish I knew how to contact him, we got to be great friends when I rented from him. But for true, smooth glove work, Bateson is one of the best homegrown shortstops there is. I still remember him shattering his nose and playing the rest of the season with a hocky/catchers mask on. Aint nobody like "chicken"

Rambo: Don't you mean, "Jughead?" And yes, I was talking Jr. I worked for years with Sr and played ball with Sr in the 80's for our mill team. Jimmy is around still, was a good outfielder in Slow Pitch and a great 3rd Baseman in Fast Pitch.

Oh, darn, he's not that old -- yet! I sure hope you're able to get that wrist taken care of soon, Richard. I know so many people who put those things off only to finally get the surgery then wonder why they waited so long! Take care of yourself.

Hey Richard
If I was you ,I would get a second doctor to look on your wrist,I had Dr. Lyell do my knee,and need less to say,it was worst after he cut into my knee,I ended up having to have it redone, three years later ,which I was in so much pain ,by Dr Kosh,he couldn't believe what a hack job that was done,on my knee,I even got a video of it which I could se for myself to.And after he redone my knee,I wasn"t in anymore pain, and like yours,it happen while I was working.So,it wouldn't hurt to get a second opinion.