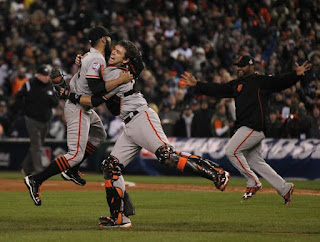 Giants win another! I am still in the afterglow of the 1st in 2010 and then this totally unexpected run. With Posey being the only full time position player form the "old" team. Just wish the A's would have been the opponent!
Posted by samoasoftball at 10/29/2012 1 comment:

Protect the voice of the working class, vote no on Prop 32!

Business interests in California have out spent unions 3-1 since 2000. And get this, businesses have pumped 1.7 Billion, yes that is Billion dollars into California elections. So beware of Proposition 32. Don't stifle the voice of the working class!
Posted by samoasoftball at 10/22/2012 10 comments:

Support Home Health Workers! Give them $2.28 an hour wage increase!

I went to todays Humboldt County Board of Supervisors Chamber to speak in support of In Home Supportive Services (IHSS) workers garnering a wage increase. One person said that you could not possible compensate them for what they are worth and another questioned on why they ran for office on the themes of jobs and living wages. It was pointed that Supervisor Rex Bohn had never hired anyone for minimum wage until his most recent election as Supervisor.

As a past union president, organizer and local worker advocate for decades I am here to implore the Humboldt County Board of Supervisors to find a solution to the obstacles of giving a raise to our 1,400 plus In-Home Supportive Service workers. These “working poor” contribute an asset that is immeasurable to the Humboldt County population. That they are only paid minimum wage with no health benefits is just deplorable and unjust. I believe in a “Living Wage” not a “Poverty Wage.”


Other counties with comparable populations have been able to find room in their budgets to not only give their In Home health Care Workers wages averaging $1.75 an hour more than Humboldt, but pay an average of an additional $.53 cents into a health program benefit.  I would respectfully ask for the Humboldt County Board of Supervisors to support at least matching like counties the $2.28 an hour difference in wages and benefits. I challenge Humboldt County staff to use creative, innovative solution oriented problem solving to make this happen.


I am sure I speak for the majority of Humboldt County residents in asking for resolution in the near future. 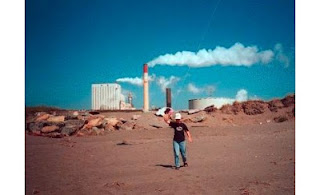 I was reminded by a past co-worker that today is the 4th Anniversary of the closing of the Samoa Pulp Mill. I miss that place of work to this day. I miss the friendships, the comraderie and even the quirks of working shift work. Too bad this mill couldn't be re-opened. C'est la vie.
Posted by samoasoftball at 10/15/2012 30 comments:

Robin was driving home from Sacramento trip today and I asked her to stop at KFC Fortuna and get some breasts, mac and cheese and taters. And a chocolate cake to wash it down. When she got there she said it was closed up! I enjoyed their buffet. We now have no KFC's in Humboldt! This is an outrage!
Posted by samoasoftball at 10/14/2012 22 comments:

Best eats from the past! 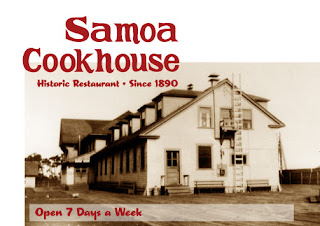 Feeling a little nostalgic this morning after reading a blog post on the old A & W Root beer place on Myrtle, so here are some of my favorite food memories of places in Samoasoftball past.
Breakfast
Eggs: The Kahoalii Café at Bazar. I have no idea what was so different in the way the served eggs. I had many breakfast meals there before going to work at Bazar.
Omelet:  Golden Harvest Café.  The Chalet close behind.
Hash Browns: Eureka Truck Terminal. They were just always the right crispy ness. Consistent.
Sausage and Toast: Samoa Cookhouse. Still and always.
Chicken Fried Steak: Betty Maes. More is better in this case. The Gravy was always good. Just had to not look in the kitchen!
Breakfast Steak: A few years ago I would have said Adel’s and Kristina’s. Both have went south lately.
Lunch
Hamburger or Hot Dog: OH’s Hamburger King on Harris. None came even close.
Fries: Lazio’s and the Students INN. Tied and both were just fantastic.
Onion Rings: OH’s again. By a huge margin.
Sub’s: L & M Drive in. Used to be in the space now taken up by Adel’s.
Dinner
Salad: I will go with the Sea Grill still.
Potato: I may get some boos for this, but Sizzler. Mostly because you can add stuff from the salad bar.
Soup: The chowder from Michael’s. Never have ate any to match!
Ribeye Steak: Michael’s. I would say AA but they are inconsistent.
Prime Rib: OH’s. Hands down. Although I have had great ones at the Oberon and Sea Grill.
Your favorites from the past?
Posted by samoasoftball at 10/09/2012 24 comments:

Went last night’s Arcata Homecoming game against Fortuna to witness Arcata spanking the Huskies 38-18. Can’t recall the last time Arcata did that. I was there to actually see the induction of the Arcata High 1982 Wrestling Team into the Arcata High Hall of Fame. Why my interest? I ended up friends with many on this team and played either intermural sports or city sports with and against them. I played basketball with Gene (Max) Emery and Owen Hooven (Former Professional Football player Drafted by the Dallas Cowboys). I played softball with and against Mike Puzz (Red Dog), Chris Brittain, Kevin Moser , Kenny Bradbury (Baril) and Lee Theuerkauf. Even the team Statistician, Theresa Cheek,  pitched batting practice to my Fast Pitch team. This was just a special tight knit group of whom I have been blessed to know! 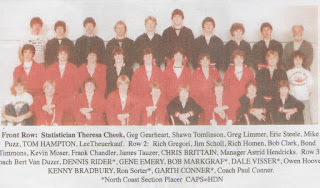